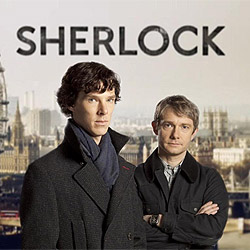 The prolific and brilliant minds who have redefined Sherlock Holmes, Steven Moffat and Mark Gatiss have ushered in a new worldwide audience for British television. Moffat and Gatiss, alongside producer Sue Vertue have ignited a worldwide resurgence in Holmes’s popularity with a formula built for success: Delicious mysteries, inspired casting, and a prickly hero as flawed as he is brilliant.

Now, after 130 years of thrilling audiences, the definitive Holmes in many minds belongs to Moffat, Gatiss, Vertue, and Benedict Cumberbatch.

With Steven just leaving his Showrunning role on Doctor Who and Mark in preproduction on the League of Gentlemen, they are joined by Sue to discuss…..

This session is a fantastic opportunity to learn more about the most creative storytelling team working today.

Credits include Sherlock, Doctor Who, Dracula

Mark is co-creator/writer of Sherlock and Dracula and has had a long and varied career on many critically acclaimed shows, both on and off camera.

Credits include Dracula, Doctor Who, Sherlock

Sue was the series producer for the multi-award-winning hit drama Sherlock and recently executive producer on the acclaimed miniseries Dracula.

Robert is the creator and lead writer of the 8 x 60' BBC 1 television series 'Death in Paradise', his first broadcast credit.

Executive Producer Robert Jones has worked with everyone from Robert Altman to Christopher McQuarrie, from Keyser Soze to a man-eating Great White Shark. Join the Zoom conversation with a man who is more than an executive. This guy produces.