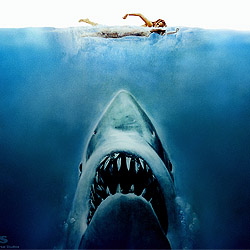 ‘You’re going to need a bigger boat.’ To celebrate the 40th Anniversary of the first blockbuster, JAWS, we are proud to host writer Carl Gottlieb in a Script To Screen LIVE. Read his amazing script first, watch the film live with him as we discuss writing arguably the greatest popular culture movie of all time.

Forty years ago, the term “blockbuster” didn’t exist. Then, in the summer of 1975, the fictional town of Amity Island was terrorized by a rogue great white shark. Too terrified to go swimming, audiences worldwide chose instead to go see JAWS again. And again. And again.

Built on the foundation of a killer script by Carl Gottlieb, JAWS dragged the industry into a new era where populist and artistic success could live in sync, to the joy of audiences spanning generations.

This promises to be an unmissbale event.

Credits include: Jaws, The Jerk, Jaws 2

Carl is a Screenwriter, Actor and Comedian best known for writing Jaws.

Eddie has over twenty features under his belt, including 'Mission: Impossible - Rogue Nation' and ’Kingsman: The Secret Service’.

I did the Elevator Pitch today and it was Joel Schumacher inside! Not only did he like it, he asked me to send him the script!"