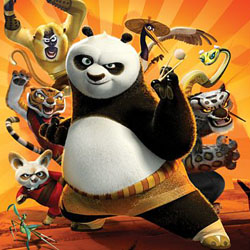 A stellar cast with Jack Black, Angelina Jolie, Dustin Hoffman, Seth Rogan, Jackie Chan, Lucy Liu… and a score by Hans Zimmer… including a wonderful and inspiring riff on the Heros Journey, with a mystical Eastern spin. What’s not to love?

Settle back with the screenplay and the film’s director John Stevenson as we get under the bonnet of this blockbuster Hollywood animated feature film.

Catherine has over 15 years’ experience as series co-creator, writer, head writer and script editor on many BAFTA-winning children’s shows.

John has over 40 years' experience in film development, earning an Academy Award nomination as director on Kung Fu Panda.

Thank you for an amazing, informative, and the most memorable LondonSWF yet!"