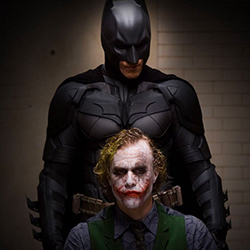 From humble beginnings to Hollywood superstardom, David S. Goyer’s journey is as epic and heroic as the main characters he has been called upon to write. Superman (Man of Steel). Batman (The Dark Knight trilogy). Blade (Blade).

When one man is made responsible for the heroes that impacted a generation, how does he adjust and adapt to that level of responsibility? Do you dwell in the dark cave, maintaining a calm front? Or do you cry “Up, up, and away!” and allow your prose to soar?

The mind behind modern incarnations of Superman, Batman, and other epic heroes

Mike has worked for IMDb, Screen International and Broadcast magazine, covering every major film event including the Oscars, Emmys and BAFTAs and interviewing everyone from Quentin Tarantino and Martin Scorsese to Steven Spielberg.

Join the online LondonSWF 365 party and get primed to have the most outstanding month of May. Find out EXACTLY what is happening, when and where and how best to use this unique opportunity.

9:00pm A Life in Movies and Other Writing Adventures: An Interview with Christopher Hampton

One of the most successful and prolific writers ever to earn a Written By credit, Christopher Hampton’s words have been spoken by Oscar winners and popular favorites alike. In this engrossing interview, learn from his long writing journey as you embark on your own.

As one might guess, the competition is fierce to write for Netflix, and rising to the top is a long shot. So how must it feel to create Netflix’s most successful film… EVER? Ande Parks, one of the geniuses behind EXTRACTION is here to tell us.