with Deborah Haywood and Gavin Humphries
moderated by Anna Smith 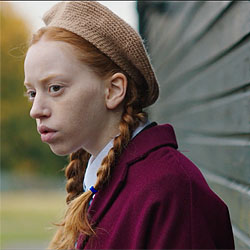 “The British director Deborah Haywood digs into her own teenage memories and unearths something eccentric, tragic and utterly unclassifiable.” – Jeanette Catsoulis, The New York Times

Some films are written and made against all odds. ‘Pin Cushion’, a magical reality dark fairy tale set against a social realist backdrop is one such film. And yet, critics and audiences are praising the “achingly fragile and genuinely, precociously peculiar” (Variety), an uncompromising vision born from the mind and heart of writer/director Deborah Haywood.

Every session LSF offers has something for the delegates, but only this one gives you the unique opportunity to meet with filmmakers at the very moment their careers are blasting off. When everyone is talking about Pin Cushion in the coming months, you can say, “I met Deborah Haywood. And she’s amazing.”

A critic for Metro, The Guardian, Sight & Sound and Time Out, Anna is a regular on Radio 4 and also appears on BBC and Sky TV.

Deborah's feature debut Pin Cushion was released in July 2018 to four-star reviews across the board and was critic’s choice in The New York Times.