How do you get your First Draft complete, in great shape AND on schedule?

Or… Maybe you need a small writers’ group, a coach to guide and drive you, a schedule and deadline and a TONNE of worldclass training and insight into screenwriting excellence.

Write Your Script in Three Months with Bob Schultz at Ealing Studios.

‘Having completed my first draft with Bob the last time this course was offered, I am looking forward to signing up for a second time and a second script.’
Jennifer Kildee Murphy, Screenwriter

How is it structured?

‘An agent has requested a script, and a major production company wants to see my next feature and have asked for another script as a writing sample. Most of all though, Bob turned my writing from a stressful experience into something enjoyable – I didn’t want it to end.’
Anthony Povah, Screenwriter

At the conclusion of this three-month course, you will have a completed first draft of your screenplay, a strategy to launch you into the rewrite process, and the confidence to share your work with others. All you need is an idea, your laptop, and the willingness to take the reins of your story and career.

Date: May 16th through August 16th.
Size: Limited to 8 delegates.
Venue: Ealing Studios, Ealing Green, London W5 5EP.
Tickets: £1,000.
Sign up HERE on PayPal or use the button below.

Each week you will receive direction and specific goals as you write your screenplay.

Then, through one-on-one mentoring, you will work your way to FADE TO BLACK.

Finally, your screenplay will be workshopped with the group to prepare for the next phase of development.

This course is designed to benefit all screenwriters, whether you are looking to create: 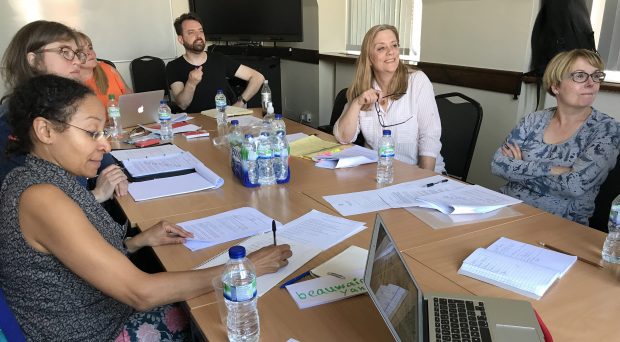 May 16:
– Acts One-Four.
– Character Work, Loglines, and Outlines.
– What Makes An Effective Scene?
– Setups and Payoffs.
– Polishing The Outline.
– Backstory.
– Act One. What Needs to be Achieved?
– Transitioning into Act Two (Where Great Scripts go to Die).

May 17: Writing Day. Come to Ealing and focus on getting those words on the page.

June 13: Students will be expected to have completed a first draft of Act One before this session.
– Act One Review.
– Act Two.
– Maintaining Momentum.
– Transitioning Between Acts Two and Three – The Crest and Crash.
– Act Three: Triumph and Tragedy.

June 14: Writing Day. Come to Ealing and focus on getting those words on the page.

July 18: Students will be expected to have completed a first draft of Acts One through Three for this session.
– Review: Acts One, Two, and Three.
– Compare and Contrast: Outline and Draft to Date.
– Checklist: Your Setups and Payoffs.
– Act Four: A New Adventure.

July 19: Writing Day. Come to Ealing and focus on getting those words on the page.

August 15 – 16: Workshopping student scripts, with advice on rewrites. Students will be expected to have completed a first draft of their entire script before script can be workshopped.

Writer and producer Bob Schultz has instructed hundreds of screenwriters in academia, one-on-one, and through festivals and events all over the world. His unique approach to completing your first draft will take you from a germ of an idea, through outlining and character development, and of course, to writing the draft.

Here are a few comments from writers who have worked with Bob:

‘After having all but given up on my flailing screenplay I was recommended to contact Bob to help me whip it back into shape.  We discussed the story and were able to redirect it in a direction which I had not thought about and which made a lot more sense. With Bob’s expert help we then restructured the outline of the story in such a way that I could go home with a full skeleton upon which I could build. Bob was of invaluable help in this process and I look forward to contacting him next time I’m stuck.‘
Nils Hauge, Screenwriter

‘What struck me about Bob was his incredible ability to get to the heart of a story quickly and figure out what was working and what wasn’t. He has a lot of insight into the structure of films and just understands HOW they work – but he doesn’t dictate and he doesn’t imply you are wrong, just offers his opinions and experience to help you make your project the best it can be.’
Mark Walker, Screenwriter

‘I took a screenwriting class with Mr. Schultz back in 2017, and the knowledge and skills I gained from his teaching and experience sharing are incomparably amazing. He’s always been willing to provide feedback, coverage, and help. Super thankful I took advantage of these services since it has helped me improve as a writer personally and professionally. His feedback is always accurate and eye-opening. 100% Recommended.’
Arlyn de los Santos, Screenwriter

‘Bob Schultz showed me how to hit an audience where it hurts, and have them thank me for it. Thanks to Bob’s mentorship, I got my first gig as a paid writer. I honestly could not recommend him enough. I wouldn’t be the writer I am without him.’
Doryen Chin, Screenwriter

‘These notes are detailed and thoughtful, and I can’t tell you how much I appreciate that! I am inspired to do some rewriting.’
Amy Amani, Screenwriter

Are your great ideas often held back by your writing that can often feel uninspired, lacking depth, truth and brevity when it hits the page? Is there room to take your writing to even deeper, writing from a more authentic place?

Spend a day with John Yorke, workshopping story ideas and refining the process with greater depth as you create a brand new TV show. Experience rapid idea execution as it would happen in a real writers room.

We were absolutely thrilled about the positive response and engagement from the delegates, not to mention the support from the festival itself!"