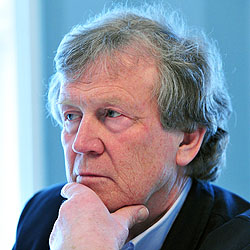 Co-chair of the Independent Talent Group, and rep to such luminaries as Maggie Smith, Alan Rickman, Steve Coogan, and Anthony Hopkins, Duncan Heath has spent more than 40 years in the industry, watching it evolve into the worldwide powerhouse it is today, while guiding the careers of many of the most influential directors, writers, and actors of all time.

After being fired from London’s William Morris Agency (for behavior he later described as “insolence and mild violence”), Heath famously wagered the last of his William Morris wages on a horse, winning a 35:1 long shot. He used his winnings to invest in a new agency, and, as they say in the horse game, he was off.

Gain the wisdom of this London Super Agent and entertainment legend in a one-on-one interview, exclusive to the LSF stage.

Duncan is one of Britain's leading Talent Agents and the co-chairman of the Independent Talent Group, Europe's largest talent agency.

Julian has years of experience as a literary agent. He is also the founder of ScriptWriter magazine and author of How To Make Money Scriptwriting.

I didn’t expect the friendliness, warmth and generosity of sharing time, ideas and experiences with other writers that I found at LSF."