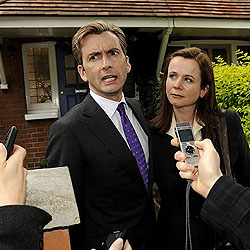 She has journeyed a classic route from the Soaps and Long Running Series through to her own outstanding work. Her career has spanned the most important and changing decades of television and her resume reflects this.

Always passionate and placing women’s stories at the centre of her narratives Paula has tackled intensely personal subjects (John David), created one of the first precent series, Angels, whilst also exploring love politics and betrayal in the award-winning The Politician’s Wife, followed by The Politician’s Husband.

Paula’s work has never shied away from confrontation and revelation and alongside her work we’ll be candidly discussing the process and the making as well as the writing.

Come and join her to reflect on art, truth and life in TV writing as we enter the world of White Heat, Small Island and her latest project , the Cold War series, Back To Back.

Credits include: The Virgin Queen, Second Sight, The Politician's Husband

Described as one of Britain's most accomplished female screenwriters, we are delighted to welcome Paula to the LSF this year.