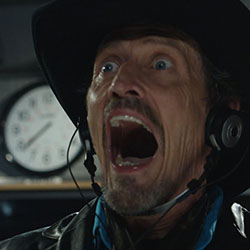 Lurking in the dark, on a wide variety of Top Ten lists for contained horror, PONTYPOOL is the gem you didn’t know you needed. In a small remote town, one host and his small crew man a little talk radio station, delivering the news and traffic…

… until reports start coming in of violence. Riots. Rage. The details are difficult to parse in the little station housed in the basement of a disused church, but fear and paranoia continue to grow in the claustrophobic confines. What is triggering the mindless destruction?

The answer will shock you. And thrill you. A brilliant twist on an already popular genre, PONTYPOOL is a glimpse into the twisted mind of Tony Burgess. And what better guide to lead us through the streets of the little town of horrors than the man himself? Join author Tony Burgess in this screening of a cult classic.

For the journey to the town of Pontypool, we must travel within the mind of Tony Burgess whose unconventional word view permeates his stories like maple syrup through a short stack.

How do screenwriters balance staying facts with drama? How many liberties can you take before leaving reality behind? Explore these and other questions involved in adapting stories based on real events and consider how these relate to YOUR projects.

7:00pm All Killer and No Filler: Up Close with Israel's Hottest Screenwriter, Michal Aviram