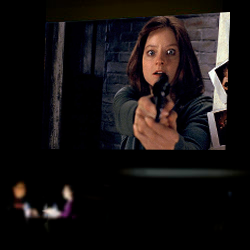 ‘A census taker once tried to test me. I ate his liver with some fava beans and a nice chianti.’

‘Silence Of The Lambs’ is without doubt one of the greatest horror / thrillers ever made. So much so, even the Academy Awards recognised it, and that’s some achievement for a routinely conservative organisation. The movie picked up the Oscars for Best Picture, Best Actor (Hopkins), Best Actress (Foster), Best Director (Demme), and of course, Best Screenplay based on Material Previously Produced, which went to Ted Tally.

Read the script, then watch the movie at the festival with a live commentary with Ted, discussing the development and execution of the screenplay – it’s our own unofficial DVD ‘chat track’.