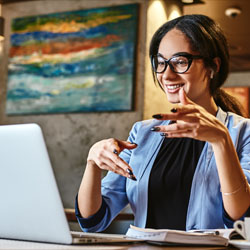 Confession time – in my 14 years of tv industry work, I made the gigantic mistake of not understanding how important networking is for a career in this industry. And what’s worse, there wasn’t anyone around to tell me where I was going wrong. It took so long to reverse that!

So many of the questions writers I come into contact with on Twitter, or those who are my film/tv students were much more practical and nitty-gritty. When’s the right time to approach an agent? How do you know which group to talk to at an industry event? How do I get a producer to open my email? How do I overcome my shyness to talk to people? These things aren’t covered in most scriptwriting courses or books, but as you know they are so necessary.

To help with this, I started to teach online international networking sessions to people new to the TV/Film industry via Zoom. I give special attention to people who are introverted or intimidated by the industry. The sessions are fun, engaging and have really taken off, receiving 100% positive feedback. It’s also expanded to guest speaking at Universities and for members at organisations like Women in Film and TV, BFI x BAFTA Crew, Black Creatives, Pipeline Writers, etc.

Just two hours of the students’ time on Zoom will completely change how they engage with the industry and help prepare them for a lifetime of success. There’s also a packet of pre-prepared notes for each attendee.

We focus on four main subjects:

We look forward to a fun, rewarding and empowering event for we shy creative types!