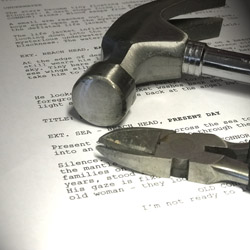 After a decade listening to agents, producers and execs, the same script issues come up again and again. Don’t let your killer script fall into these easy-to-fix potholes.

You’ve heard the saying, ‘You can’t see the wood for the trees’ – well, this is just the same. Likely you are so close, you lack perspective on your own work. In the absence of a team of readers and editors you might get on a show or feature project backed by a big company, and you will need to do the work yourself, in the great British tradition of DIY.

The good news is, it is possible to self-diagnose your script by using some simple analytical tools. In this session Clive will teach you

Unlike subjective script reports, this method takes what you put onto the page and turns it into an easily readable overview of your script. These are the same process-driven methods Clive teaches in his book The Process: of Screenwriting.

Author of The Process of Screenwriting