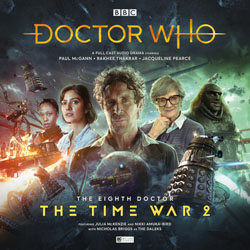 Think Doctor Who was only brought back in 2005? Think again!

Meet the creators who have kept the adventures of every incarnation of the Doctor going since 1999. Get the lowdown on how they transformed a then-cancelled scifi TV show into a vast array of adventures for audio. Dive into the various spin-offs that have been created since, from Torchwood and UNIT to River Song and The War Doctor, as well as different cult franchises like Blakes 7, The Prisoner, and Dark Shadows (but not the iffy Johnny Depp version).

Discover how to write exciting, limitless ‘genre stories’ for audio, from sci-fi to horror, from comedy to romance, from the futuristic to the historical, audio drama can be anything.

Credits include: Doctor Who, The Avengers, Survivors

John’s scripts have been produced on stage, radio and as audiobooks and he has won multiple international awards.

Credits include: Torchwood, Wizards Vs. Aliens

Credits include Doctor Who, The Omega Factor