with Paul Testar, May Gibson, and Nasreen Ahmed
moderated by Georgina Sherrington 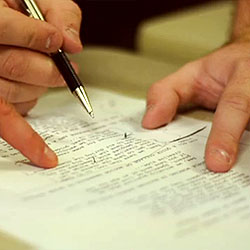 We all know that sinking feeling when we’ve sent in a script that we’ve sweated over, lost sleep over, even sacrificed boozy nights out for, only for someone to come back at us with notes. And to top it off, these notes actually make things better!

Who are these wizards and what is their dark power to take your script from good, to great, to…OUTSTANDING.

Script editors are often overlooked, but the best ones out there are the lynchpins holding together the disparate priorities of the writer, the story, the producer and the audience. They are essential players in escorting your stories on their journey from script to screen.

But let’s look at that dark magic. Let’s find out what a Script Editor’s day-to-day looks like as they shepherd a project to the finish line. How do they juggle their many different responsibilities? And how can you get the best working relationship with your script editor?

Script Editor on 'Doctors' and recently also story edited a five week special on the subject of Homelessness.

Learn how to add fiction to your truth in the key parts of your story. You will learn how to identify your own life themes and in doing so, you will find out what it is you want to say to the world in the stories that you tell.

August 20th 8pm... Crafting the Perfect Character: The Heart of Your Story - with Jon Gilbert

Your characters need to connect with your audience. They drive the story through their choices. They must simultaneously be multi-layered and clearly-defined, nuanced and precise, complicated and accessible. And they must attract actors and directors.

August 27th 8pm... How Your Worst Writing Can Be Your BEST Work

Conquer perfectionism and writer’s block by purposely writing terrible scenes and dialogue. You read that right. The worst. You will finish a scene you were stuck on, make yourself laugh and then be inspired to make it better. Bad writing is the new good writing.

Using ideas from analytical psychology, myth and anthropology – and with examples from feature films, single episodes, season stories and multi-season arcs – we will show you how to get to grips with the most important final moments of your story.

August 6th 8pm... The Girl With All The Gifts: Urban Modern Horror Deconstruction

From book, to script to screen, join us to experience the journey this extraordinary modern horror story undertook to become one of the most loving yet ferocious takes on the zombie genre.

July 23rd 8pm... 'Withnail and I' script to screen with Bruce Robinson

“We want the finest wines available to humanity, we want them here and we want them now!” Bruce Robinson and ‘Withnail and I’ script to screen.

July 30th 8pm... Writing For The Right Young Audience; how to hit your mark every time!

Do you want to write for children, but worry about hitting the right tone? Worry no more!  This panel of outstanding screenwriters will give you all the advice you could ask for to make sure your script is aimed at the right young audience.

Learn how to use powerful and psychologically-valid techniques to develop memorable and engaging characters in this session delivered by Kira-Anne Pelican.

Join us online… “We’ll get together, have a few laughs”… and watch the 1998 smash hit, whilst screenwriter Jeb Stuart talks us through the development and production of this Bruce Willis classic.

September 28th 8pm... What Makes the Audience Return To A Series? Mastering the Internal Story with Jen Grisanti

When we feel your story, it makes us want to come back. In this class, learn the techniques that will make them want more. When you do this well, you create longevity for your series.

July 9th 8pm... Writing With Purpose: How YOUR Work Can Change the World

What we do as screenwriters can often inspire hearts and minds, even change the world. If ever there was a reason to write, this is it…

Nicholson has an impressive body of work, Gladiator, Nell, Elizabeth: the Golden Age, Les Miserables, Mandela: Long Walk to Freedom and of course his hit play (which he adapted for the screen) Shadowlands.

Claudia Myers leads this cracking session about creating complex and compelling characters that hook us into a story and refuse to let us go.

Another fantastic session to educate and inspire!

I came to the LSF thinking that execs and agents were terrifying – now I know they are just lovely people who WANT your script to be great."