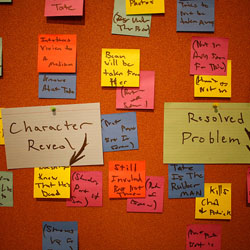 Jon directed Casualty’s groundbreaking ‘One’ – an entire episode in one shot, written by Paul Unwin.  He has previously worked as a regular director on several long-running drama series including Waterloo Road and Holby. Outside of his key role in the Casualty core team, he’s also currently developing a feature film Home and Two Tribes a six part crime thriller for BBC in house drama.

Hand picked by LSF Writers Room creator Barbara Machin to head up this room, Jon will take six successful applicants through a typical day in his Casualty room, working to a strict deadline with all participants collaborating under pressure to brainstorm and write storylines for existing and new characters in a brand new episode that will be created in the room.

The six successful applicants will join Jon in his Writers Room for the whole day on Thursday 6th September.

Participants will be expected to come to their Writers Room having thoroughly researched the show.

** You can submit materials from a TV project of any genre but if you’re selected, be prepared to experience a MEDICAL themed Writers room.

** Please note that all Showrunners will be running their Writers Rooms as they would in real life.  All participants will be expected to follow the guidelines and procedures as laid down by their Showrunner on the day.