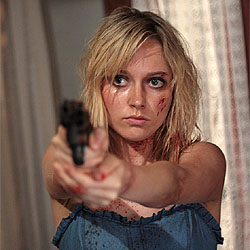 Thrillers can be any story, told in any way – all they need to be is … well, “thrilling”!

Yes, this might be obvious stuff, yet Thriller is frequently the most misunderstood genre in the spec pile. Scribes very often turn their Thrillers into dramas by accident, or make their characters “run on the spot”, sapping tension and potential jeopardy for the reader – the very opposite of what a Thriller should do!

Script editor and author of Creative Essentials’ Writing And Selling Thriller Screenplays, Lucy (aka @Bang2write) has read countless spec Thriller screenplays and been involved with indie Brit Thrillers Deviation, Act Of Grace and the upcoming Assassin.

Looking at various successful Thrillers, both studio tentpoles & indies as well as those hidden gems you may not have heard of, Lucy will walk you through the writing of a Thriller, drawing attention to its contrasts with other genres in both structure and character.

During the session Lucy will be addressing such questions as:

So if you’re keen to write a Thriller – or indeed rewrite one! – then this session is not to be missed.