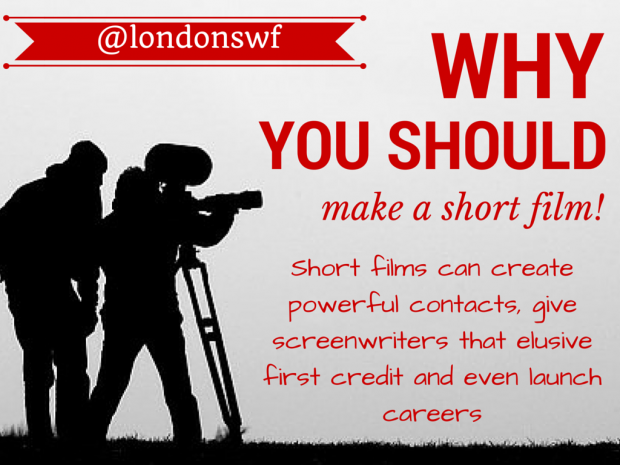 For directors, actors, producers and DOP’s, short films are the calling cards of the film industry. And for the writer, they’re a unique kind of project. If you’re used to character development and plot over ninety pages, creating an attention grabbing story in under ten minutes might be more of a challenge than you think.

What’s more, a completed short film gives you the opportunity to get shown at festivals and can show agents & producers how your longer work actually might translate onto screen. So here are 5 quick tips for writing an ultra –low budget short film that a director will want to make…

This not only helps you in practical terms; camera set-ups, security, speed, size of crew, it also creates discipline for your storytelling. MORE: Why ALL Screenwriters Should Write a Short Film

… And make sure the audience know what is happening! You can get three-act, or even five-act, structure into a short film. You CAN have scenes with conflict. You can make your characters change and learn. MORE: 6 Steps To Make A Short Film

Short film is a directors’ medium and directors (who will often be self-financing) want to be able to show off what they can do. MORE: How To Write Your Script To A Microbudget And Not Make It Look Microbudget On Screen

We all have access to different locations, props, and characters. People love to be involved in a one or two day shoot, even if they’re not filmmakers. Brother in law work in a supermarket? Perfect. Boss flies his own helicopter? Awesome. Spoilt colleague owns a pony? It’s time they did you a favour.

And whether it’s a swimming pool, stifling suburban living room or an open plan office, set the film somewhere you can access. Then when you pitch it to a director you’ll be able to offer them not just the script, but a big step in getting it made –the location. By making the project that tiny bit easier, you can attract a good director who’ll make the best of your work, even with very little money. MORE: Top 5 Ways To Getting Your Short Film Produced

BIO: Meg Goodenough has been short-listed for the Crime Writers’ Association Debut Dagger Award; long-listed for the TS Eliot award and won a BBC Writers Room/Ideastap competition. Her first novel A Company of Roses was published in 2015. She has work, including a short film, in pre-production. Check out Meg’s blog, HERE and follow her on Twitter as @book_meg.