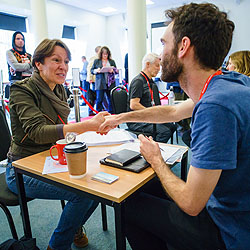 OK take a deep breath… and check out who you can pitch YOUR projects to this year at The Great British Pitchfest!

Sixty professionals from over fifty companies heard pitches at the last Pitchfest, leading to hundreds of script requests. Execs, Producers, Directors and Agents attended from these companies in past few years.

Looking for contemporary and diverse Film & TV projects, with a socio-political edge and ideally from a female-driven perspective.

At Free@Last TV, we know what we're looking for so we want to be surprised by what we don't know we need.

Barry is looking for ideas that surprise, inspire and add new ideas to any genre.

We are excited by bold and authorial storytelling across both Cinema and High End TV.

Looking for commercial, British and Irish stories that will resonate locally.

DCD Rights are always on the lookout for original concepts and exciting scripted series to present to the international market. Commercially, the genres we are looking for are drama, thrillers, crime procedurals and family/social dramas for 60minute slots

Looking for compelling contemporary stories with a sense of place, humour, verve and universal relationships.

We are looking for hour long, multi-part series for UK broadcasters and SVODs. Twisty psychological thrillers, especially with a relatable newspaper headline hook are always welcome. But our favourite projects are often ones that surprise us and showcase

Looking for bold concepts, projects that reflect modern Britain and genre shows with a twist!

Currently seeking projects that tell a compelling story, are in an identifiable genre and which would have international appeal. Ideally with budgets of up to £5m.

Looking for anything from a lower budget execution-dependent psychological horror to a more expensive, cast driven comedy for an older audience. Key for us in any genre is a clear tone and a fresh point of view.

looking for an original voice with an irreverent and cheeky tone, which can come in any genre or format.

If your idea is “bonkers” or “out there” then it is probably a good fit for us. We gravitate towards the visual and visceral and are looking for escapism and imagination. Female-centric projects are strongly welcomed!

Looking for comedy writers to work on pre-existing projects from Preschool all the way to Adult and all in between!

Nick also focuses on new writing and covering all submissions - looking to build on the number of projects already in development.

Interested in animated projects of all shapes and sizes. Anything we couldn’t possibly think of ourselves.

Looking for stories that can find audiences both sides of the Atlantic, with high production values and casting opportunities.

The company seeks to finance and distribute distinctive films of quality for theatrical release internationally. We do not focus on specific genre. We don’t do TV.

Looking for female-leaning premium on-going one hour series. All genres.

Looking for all genres and formats (including novels)

Prefer stories set in the present day. Not interested in period pieces.

Grace Ledding is an independent producer and manager who began her career in entertainment ten years ago.

A founding Partner of CatchLight Studios, Jeanette has worked on over 85 feature films, most recently as Producer on SONGBIRD.

Currently looking for film and TV scripts emphasising story and character that can work in the UK and US. Collaborating with partners in LA.

Bleecker Street is an American film distribution company based in New York City.

Benaroya Pictures was founded in 2006 by CEO Michael Benaroya to develop, finance, and produce major motion pictures across a variety of genres and platforms.

Terry Botwick has been responsible for the creation and oversight of more than 2,000 hours of television series, special events, and films.

Currently looking for independent features with some financing in place (female centered dramedies or dramas preferred) to direct.

The LSF is my Christmas. Regent’s is my second home."

Dutch London Pictures looks to develop the offbeat, quirky and weird. They are looking for confident and clear, collaborative writers, who know their stories, their characters and why they need to be shared with the world.

Barnaby is a founding partner of Embargo Films, which has produced "I, Anna", "Pusher", "The Sweeney", "Still Life", "Miss You Already" and "Scarborough".

Looking for film and drama, adaptation or original scripts with character and narratives that I have an emotional connection with, and that also have broad appeal.

jolliwood entertainment is looking for stories with international appeal that can play seamlessly across alternative distribution channels, as well as counterprogramming content. No horrors, actions or sci-fi.

Dami is looking for writers of underrepresented identities who want to write authentic and exciting stories.

Looking for screenplays that play to the strengths of Independent Cinema - high-concept character-driven stories that can engage and inspire international audiences.

What we're looking for: The Fuchsia Corner is focused on producing bold and thought-provoking content for film, TV and online distribution that feels original, fresh, modern and very well-executed.

Looking for film scripts that have a clear and strong genre, but find an interesting and original way to attack the space.

Primarily looking for genre stories with a unique twist and some contemporary social relevance.

James Brown – Producer | The Other Producer

Produced by James Richard Baillie together with Iranian filmmaker Tina Gharavi, BAFTA-nominated "I am Nasrine" was described by Ben Kingsley as "an important and much-needed film."

Looking for projects about the environment and climate change, and projects with a Spanish/Hispanic link.

Elation are looking for projects at all stages of development. They are particularly eager to find comedies, sci-fis or good thrillers.

We work across most genres, in feature films and television drama, although at the moment are more particularly looking for television drama, stories based or inspired by true events. Diversity and representation are really important to us.

On the lookout for proactive storytellers, people with a passion to learn beyond just the writing stage, having a desire to think about how their script and pitches work in the context of an entire production.

Having cut her teeth on commercials and promos Margot Douglas has spent the last few years coordinating on award winning short films.

Looking for commercial genre features under £3M. Interested particularly in sci-fi, action and horror stories with a fresh hook and international appeal. Not looking for British comedy.

Thunderbolt Media & Entertainment is open to all genres except Gore/Slasher.

Rachel Richardson-Jones – Producer | Not A Number

Rajita was Longlisted for a BIFA in category of "Breakthrough Producer" 2020 and is Film London Lodestar 2021.

Saskia started her career in drama as a freelance script editor before climbing her way up the comedy ladder to Sky, then ITV and recently to Fulwell 73, where James Corden is a partner.

Hurricane Films' ethos is to tell great stories - whether fact or fiction.

Currently focused on historical and fantasy Sci-fi genres with big stories that are based on the characters' journeys. We are looking for stories that need to be told now.

Stewart is open to hearing most ideas although less keen on straight horror. Looking for both Film and TV.

Susan has an interest in developing and producing films across genre but with a focus on stories that provoke; stories that embrace who we are and where we might go; stories that shift our axis of understanding.

WEP is a multi-award winning independent production company based in London and West Wales. Its current slate includes production and development in film, TV, theatre and digital media.

Absolute value for money. My advice would be to new attendees: take a look at the schedule and all the speakers in advance and do a bit of research."

Andrew has been a talent manager working with screenwriters, directors and dramatic rights for eighteen years. His clients range from first-time filmmakers to Oscar nominees, working in all genres and media around the world.

Meg's personal specialty is handling television and film rights as well as working with film scripts.

EyeFive Films is the home of writer, producer, editor and director Abid Khan. EyeFive aims to produce content with international appeal about self-discovery, identity and coming-of-age, with a particular focus on diverse talents and stories.

Ben is looking for writers with high-concept, very contained scripts.

Looking for Drama/Arthouse type films, I usually like things with a little humour. Interested in low budget arthouse sci fi. NO action/horror.

Gerardo has had a rich and varied career, first as an actor, then as a photographer and now as a film director.

Joe is a Producer/ Director with his own production company with a slate of projects in development.

Far Lane Media are looking for Character-driven dramas and/or thrillers, as well as stories that have a sub-genre of science fiction and/or mystery.