Having scribed films and TV about iconic characters including Batman, Superman, Sandman and Leonardo Da Vinci, David Goyer had (unsurprisingly) some great stories to tell about his experiences working in Hollywood.

Here are some takeaways from his entertaining, extensive responses…

David answered various questions about his journey to Hollywood. The big message was the need for not only screenwriting talent, but also persistence and luck. This said, his story on how he ‘got lucky’ was really persistence in disguise. Consistent bullheadedness was what caused his luck!

He rammed that point home with specific advice: “Accept that rejection will happen, and doggedly persist.” Even as a professional filmmaker with miles of success, he still has projects that he hasn’t been able to get off the ground for various reasons. The key, he says, is to just keep going.

Thomas Wayne: “Why do we fall, Bruce? So we can learn to pick ourselves up again.”

On developing Batman Begins with Chris Nolan, David set the scene with the two of them sitting on opposite sides of a table scribbling on 5×7 index cards. They worked on the film’s themes before they touched on the plot. By honing in on the central tenants first, they deepened and focused their ideas, which eventually made for a much greater film.

Their desire was to create a very different kind of Batman film from the ones which had gone before, steering clear from the gothic and the camp. They wanted to challenge assumptions, while remaining true to what makes Batman iconic. Their take on this, what became their mission, was to make Bruce Wayne as interesting as Batman.

Following up on this idea, David recalled seeing Kevin Costner talk about Waterworld after it failed. Costner said “failure is underrated.” It’s not hard to excel when all is going well – the test of someone is what they do when they get knocked on their ass. And with this in mind, David saw Bruce’s choices leading to the destruction of Wayne manor. From there, the audience follows his journey as he attempts to rise again.

Now that he has worked with existing characters and well known properties a number of times, David has a number of “Do No Harm” rules. In the interview, he talked about how he takes the time to consider the central DNA of a character and ensure it’s represented in the film. “If you propose something that goes against the grain of what the character/concept is, it will not succeed,” he warned.

This said, he also uses that knowledge and understanding of who the character is to challenge himself and do what is unexpected of the property. This way, the appeal broadens beyond the existing audience.

Henri Ducard: “Men fear most what they cannot see.”

Finally, David covered the importance of getting things down on the page. He recommends showing work to trusted colleagues, and staying open. “If enough people say you’re drunk, you should lie down.”

On the bugbear of writer’s block, his solution is the one we’ve all heard a million times before but it’s worth repeating because it’s David Goyer saying it: Just keep writing. Create a ritual for yourself; write at the same times of the day if you can (Goyer’s writing hours are 10am to 3pm) to start working on that muscle memory. And when it doesn’t flow, just write what you can  and push on through.

Given the amount of great films he’s made – I’d take that advice and run with it. Given his output and juggling of multiple projects, I suspect it works! 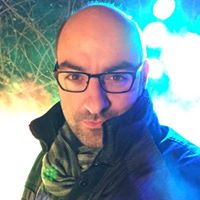 Alexis Howell-Jones is a screenwriter who specialises in thriller features. Having worked helping people through the worst times of their lives after life-changing injuries, he writes about protagonists put through the worst pressure they’ll ever face. Alexis also runs an international group for writers called Write Then Socialise where writers get pages done and network. If you’re interested to know more, join on Facebook or contact Alexis by email (ahjwriter@gmail.com), Facebook Messenger or Twitter (@lexhj).

A production company I pitched to were interested in my idea for an adapted screenplay. I negotiated an option for the film rights with the publisher and am about to submit my draft!"