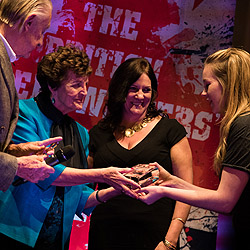 Feedback For The London Screenwriters Festival 2014

For the fifth year in a row, the festival grown in size. And this year we launched the hugely successful British Screenwriters’ Awards, putting screenwriters front and centre where they truly belong.

Here is what both our speakers and delegates said about their experience at LSF’14.

And what’s with all the F*****g Awesome feedback? You had to be there. It was a gamechanger.

About the PitchFest HERE

About the Legal Clinic HERE

About the Script Surgery HERE

About Meet The Experts HERE

About the Elevator Pitch HERE

About the Actors Table Read HERE

About the Pitch Factor HERE