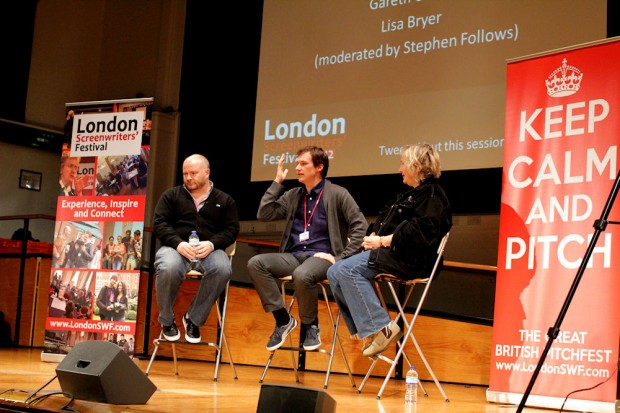 Stephen Follows interviewing Gareth Unwin and Lisa Bryer is quite the collection of Producer talent to have on one stage. What is the collective noun for a group of Producers anyway? My feeling after this is that it should be an ‘importance.’ These are the people who get films made and champion a screenwriter’s work.. or not! These producers came to tell us what it is that makes them regard rather than discard the work and people that come into their path.

Gareth Unwin began as an AD on other people’s films and had wanted to do more with their production company, Bedlam Productions when the Exam project crossed his path, a successful film in Exam under his production belt the next film he produced was The King’s Speech. Oscar glory and international success followed. His current film Zaytoun is newly released and receiving it’s own acclaim in major festivals.

Lisa Bryer in her own words started “A million years ago!” producing music videos and commercials before moving into film production on shorts like Andrea Arnold’s ‘Wasp’ and feature films, producer of The Last King of Scotland she now oversees rather than directly produces projects and is working with BAFTA currently on their new scholarship scheme.

Both agree that for screenwriters working with producers, the material has to be right. “It would be wrong,” says Lisa, “to take on development of a project unless it had a decent chance of getting to the screen.” Not only the material but also the writer has to be right. “You get a feel,” Gareth says, “For which writer is right for the material you want to adapt.”

Tips for new writers who aren’t known to producers seem to be about showing what you can do, without initially asking too much of a busy producer’s time. Peppering producer’s social networks at 6AM a Sunday morning is the wrong way to get noticed.

Lisa suggests short film is a great way to start, get your words shot and then present that. For Gareth he says samples of work take up much less time to look at than a full screenplay so sending those to a producer initially means looking at your work takes fifteen minutes instead of four hours. Pitches too, he prefers kept short and appropriate behaviour is essential to show your professionalism to your work and theirs. Personal hygiene is also essential to present. In spending many hours in a room with a writer during that environment needs to be a pleasant one. It’s clear from the producers that listening to the industry and understanding the business help you to be part of that industry and better to work with.

Lisa Bryer says she prefers it if writers have an agent because the amount of time in a room together fosters friendships and for both writer and producer having an agent to deal with the business side of things is an important professional barrier to keep working relationships healthy.

In terms of definite no-no’s that will NOT get you hired, Gareth talks about writers who don’t do their ‘due diligence’ and that it’s frustrating when someone hasn’t done their homework to know about the company and people they are asking to work with. For writers to be able to judge the producers they work with too, he suggests that it’s best to put yourself in a position of knowledge. For Lisa, too much arrogance in a writer is something she doesn’t like. In terms of how these producers work it’s clear that though they’re very different people, when it comes to their professionalism and dedication toward their projects and writers the standards are very similar in terms of what they want and don’t want.

For what they do want, Lisa says “To me it’s all about the idea, the story.”

If you are as passionate about writing as these producers are then you can’t say fairer than that!