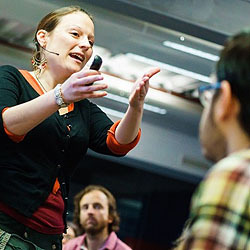 This weekend at Ealing Studios we are hosting the third and hugely successful ‘Breaking Into Script Reading with Lucy V Hay’ masterclass.

Learn how to offer better feedback, improve your writing through reading, increase your sphere of influence and make money in the process. We all know Lucy really knows her stuff and will deliver a fabulously informative two days, but have you seen our three guest speakers?

Guest Speakers For This Weekend…

Karol Griffiths – Script Editor & Supervisor
Karol has been Lynda La Plante’s script and copy editor for the past 3 years and has Edited and Supervised many prime-time TV shows (‘Friends’, ‘How I met Your Mother’) as well as working with the Coen Brothers on ‘The Big Lebowski’ and ‘The Hudsucker Proxy’.

Sabina Smitham – Freelnace reader and development
Sabina has freelanced in development for two years, and in that time has been a script reader for companies including Working Title TV, Kudos, Sky Drama, Ecosse Films, Mammoth Screen, Wall to Wall and Monumental Pictures.

If you want to know more, you can get more information on the site HERE.

And don’t wait, it’s THIS weekend.