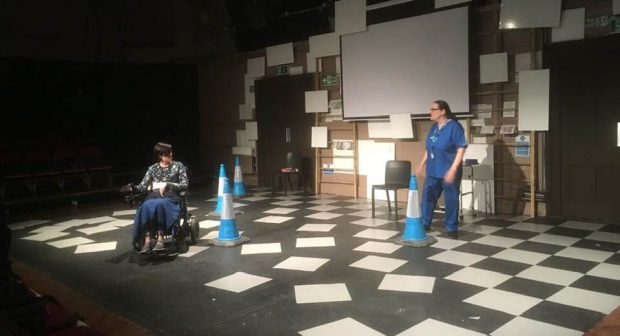 Panayiota Panteli makes things happen.  She picks her goals, plots her journey and she is off. The proof that her focus has paid off can be seen in her play, Back To Hackney. Not only did it earn her 5* reviews, she also got her first professional credit.  Sharn Gill caught up with Panayiota during the final week of her production to find out how it’s all going.

“I am soooo tired and it has been so stressful. It’s only been now that I’ve been able to enjoy it. I’m glad I did it though.”

That could be because Panayiota not only wrote the play, she produced and directed it too. And she did it all in 3 months!

“I was very lucky to have the support of Theatre practitioners to get me through this. They shared their experience and advice on what I needed to think about – right down to what I needed to get out of the actors.”

Where it all started…
It was when she used to sneakily write stories in her maths class that she knew that she first wanted to be a writer and writing stories then developed into writing her own episodes of TV dramas already on screen.

“I wanted to develop the character more.  Back then, I didn’t know how you could make a living out of writing until much later on.  This was considered a hobby.”

One of her earliest and key supporters in Panayiota’s life was her dad, who passed away

“He would really encourage my writing. He loved the arts, cinema, theatre and he bought my first typewriter too. He really influenced my love of film”.

The Talent Campus Journey
Before Talent Campus (4.0), like many of us, Panayiota did not have much confidence in her own writing ability, often worked as a co-writer and enjoyed small successes.

Since Talent Campus, Panayiota was selected for the BBC Casualty Writers Room at LSF, worked as a First AD on an Impact50 film and has been selected for the BFI Film Hub South east Project Lab (to name a few things).

“Talent Campus helped me develop relationships and recognise myself as a writer on my own merit. After that, I thought about what could get me that professional credit and elevate me to that level? TC gave me that belief that I can get things produced by myself. And I thought to myself “I’m going to put on a play.” A play is more accessible, it would help me produce faster and allow me to explore ideas more. I can honestly say that without Talent Campus, there would be no Back To Hackney”

Panayiota has continued her Talent Campus journey by volunteering as a coach to other campers. She was my coach and can honestly say how inspiring and helpful she is with her tips and advice.

“It is my way of giving back really. There is no competition here – no one has the same voice. Everyone is on a different level and overcoming their own blocks. From those who are experienced to those who are brand new. It’s great how people are willing to help each other. I coached on 5, 6 and will be there for TC7. ”

The gem of the idea…
Panayiota is a carer, she has been for 20 years. And it was this that bought out the activist in her. After witnessing how the disabled are often treated and disregards, she wanted to campaign for them in her writing.

“The Paralympians are great. Strangely though, it has also put pressure on others who have a disability – so when meeting someone who is disabled, there is sometimes this attitude of “so what can you do then?” Some people just want to get on and lead a normal life, to be treated like everyone else, not to be pigeonholed, to be accepted.”

It was whilst she was visiting a close relative in hospital that she came across the idea for Back To Hackney.

“I met a woman in the spinal unit who should have gone home after 6 months. She had been there for 3-years. When I asked why, she said that the council wanted to put her in a care home. Due to cutbacks, most councils now think it is better to put wheelchair bound residents in a care home rather than adapt the house or flat or provide carers. But she was determined to get back to her own home and why should she give up what she has worked so hard for? And I wanted to tell that story.” 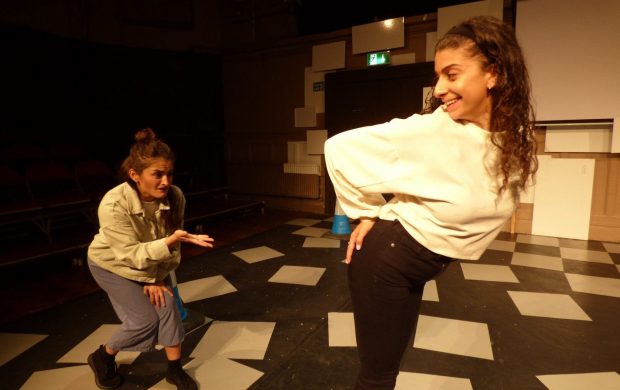 The challenges and the wins…
Like many of us, I am sure, Panayiota had never considered doing a play before, let alone in 3 months!

“It’s very different to writing TV or film. I wanted to tell the story visually and you still can with a play but it is done in a very different way. I admit I struggled with the medium a bit at first. The scene changes were tough and, even now, I think could there have been a better way? I also think I need to be aware of how to work the stage better, more effectively.”

As an audience member, I can assure you are drawn into the story, the characters and the rollercoaster of emotions and completely forget you are in an intimate theatre in the centre of London and you picture yourself in the spinal unit of a hospital.

Panayiota didn’t just stick to the stage for this production. She wanted to add authenticity into the mix and freshen it up by incorporating another medium.

“I think it had a very TV feel to it – I modelled it on the kitchen sink dramas you get. And I incorporated a screen in the theatre and showed some of the scenes that had been filmed outside. I haven’t seen this done in before (although am sure someone has done it) and some people will think that this isn’t theatre but I think it was a different way to portray ‘outside’.”

One of the strengths of the play was the balance of heartfelt emotion with humour, a dose of realism and what is going on with social care today.

“I am a woman, a carer and an activist. My stories are reflective of my experiences and I can speak of it all first hand. Today, all we hear about is Brexit, and yes that’s important, but I like to tell the smaller stories. I know that Back to Hackney can be subject heavy so I interjected the light with the dark. I wanted to give you a heartfelt drama and if I can evoke emotion – making you laugh and cry – I have done well”.

Panayiota counts having a great cast as one of the keys to Back To Hackney’s success.

“We were like a family and it made it so much easier. There was no drama and we all worked really well together. When casting, one of the key factors was whether that actor would gel well with the others, regardless of ability. Of all the cast, getting the actress to play Georgia was the most challenging as I wanted her played by a disabled actress and I had no idea where to start. Luckily the National Theatre proved really helpful. They let me check out their database of disabled actors. I viewed their monologues and found Teresa (Taylor).”

Back to Hackney became more than just a professional credit to Panayiota – it became her teacher in writing better dialogue.

“In theatre, you also work off the “show, don’t tell” rule but you feel a bit freer. When you hear actors say it out loud, it highlights the clunky and the repetitive and it forces you to keep your descriptions brief and to focus on conversation. I’m a perfectionist so during rehearsals, I would be re-writing dialogue – so much so, the actors would be telling me off! This was definitely a masterclass in how to do dialogue.”

When industry connections showed up and remarked on the strong and sharp dialogue, she knew it had paid off.

She can’t get enough of…
If we are talking industry professionals, Panayiota bows down to the greats: 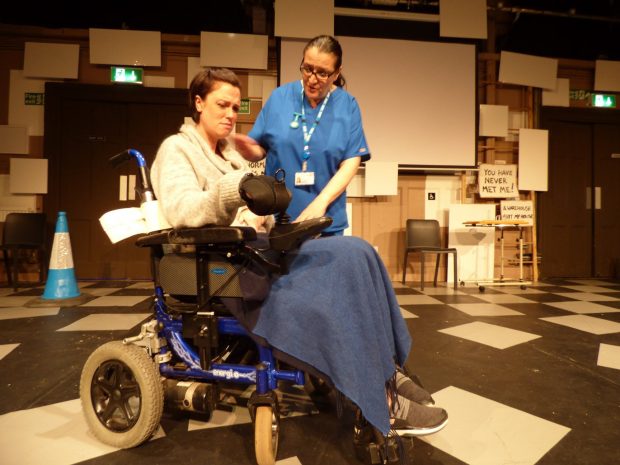 When the tough get going…
For the times it gets tough, Panayiota relies on a diet of good family and friends to pick her up and dust her down. And feels privileged to be able to lean on the the support and knowledge she gets from other Talent Campers.  She does have a secret vice though…

“There’s nothing like going to the cinema from when the lights go down to when the credits go up. For a few hours, I get to lose myself in another world. It calms me down, reminds me that this is what it’s all about. It’s my therapy.”

Where to from here?
Panayiota has a white board on which she writes up all her goals.  On it, she has 2 features, 1 play, 2 TV pilots, a short and audio dramas. She gets her drive from when she used to write and deliver soft skill training for a bank. When I ask her what she has coming next, you can feel the energy of that drive and it’s contagious!

“I think there is so much more to Back To Hackney and I want to expand that story into a feature film, even if it means making it myself on a small budget. I also have a historical feature and YA drama series I am working on and an audio drama I have finished is being mixed in L.A. There is also an idea brewing for an animation feature on disability”.

Back To Hackney was Panayiota’s debut play and it launched at London’s Theatro Technis on 23rd May with the final showing on 1st June. 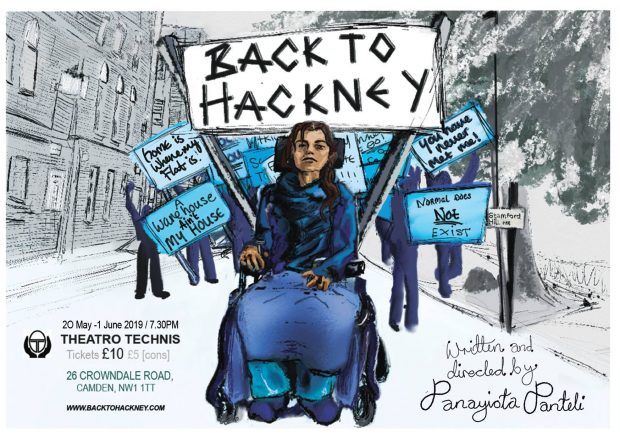 5 Top tips for getting produced:

3 Books to get you through the hard times….