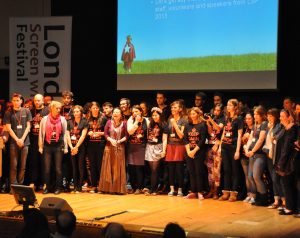 The London Screenwriters’ Festival is run by screenwriters, producers and filmmakers just like you.

And we believe passionately that we are all in it together.

Want to join us? See if we are hiring… HERE

Senior staff at the festival, Bob helps organise everything and mentor Talent Campers.

Lucia heads up the office and is the first person to turn to if you need help and support.

Lucy is a screenwriter, script reader and novelist

Oli is a writer, director and actor who oversees stage tech at the festival

Heading up the ATR, who is English / German bilingual who you last saw alongside Brad Pitt in 'Allied'

Putting together an extra special series of sessions at the festival.

Leilani an actor/writer/director live tweets and blogs from the festival seminars and events. Hashtag: #LondonSWF

Piers is our web wizard

LSF crew veteran, Simon will be directing the filming crew with Seb.

Video Editor & Cameraman, loves learning all about the writing craft.

BU scriptwriting student with a keen interest in organising events.

Cat lover, pizza enthusiast, film and television appreciator. Living vicariously through stories, so why not create them?

I am a media graduate, passionate about reading and writing alike.

I’m an ambitious daydreamer and a nature lover with a strong work ethic and positive attitude. Hungry for new experiences.

Writing about books, films, film festivals, myself, my fictional self and many other fictional and non-fictional selves

Dedicated to developing accessibility for artists in the UK, and has worked with a diverse range of cultural institutions

I am a creative and reliable cosmopolitan story-teller. My various journeys around the globe inspire me.

Aspiring scriptwriter currently studying Scriptwriting for Film and Television at uni. One day I hope to write comedy for TV!

I'm a Pearl Jam/Kubrick/Beckett loving metal-head with a passion (and hopefully talent!) for screenwriting.

Rachel Tookey is a writer and director for theatre and film. Her work has been shown in London, Edinburgh, and New York.

Maths and Physics student who writes and makes films in his spare time. Co-president of University of Warwick's film society.

An enthusiastic individual who has a passion for writing lyrics, scripts and poetry, among other aspects

I’ve run a production company for six years, done the fest circuit, and it’s safe to say LSF was the most electric, stimulating and family-like experience yet."