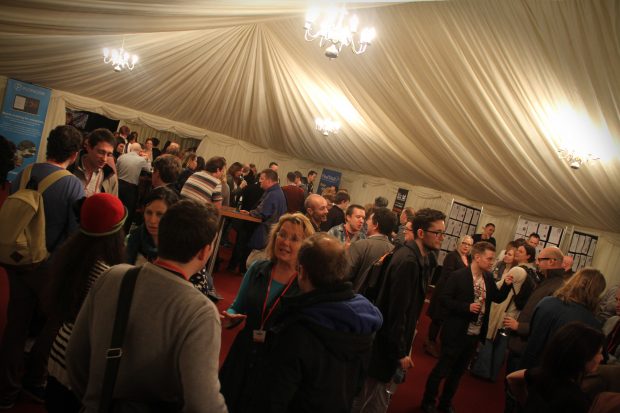 For those that don’t know, it is an annual event that gathers together screenwriters from around the world. We meet old friends, make new ones, watch presentations on theory and application and walk through films and TV episodes with their writers. We also pitch to companies, have actor script readings, mentoring in small groups, do writers room sessions, the British Screenwriters Awards… basically everything you need to strengthen your career.

This was my third year and, unlike in the past, I just concentrated on the talks and networking. Even with this limited attendance I still got loads out of the event.

So what did I attend? The usual Thursday Night gathering to get passes and meet up with people. I did most of it sitting but people were happy to come up and chat with me. 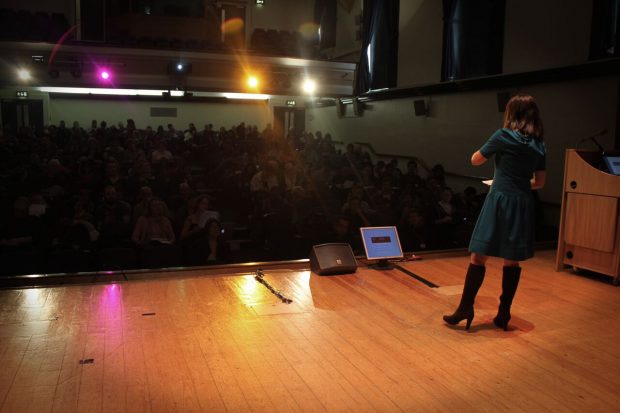 I attended Chris’s festival opening ceremony. He really knows how to get you all inspired and excited! I even cried twice… Once when he showed those we had lost this year, and then when he asked us to remember the first film we ever saw and how it made us feel. (For me it was Bambi – I was four and it affected me so much I didn’t sleep properly for months!)

Then I went to Kira-Anne Perlican’s ‘Psyche Up’ session, which covered the psychology of character based on behavioural psychology, rather than the simplified versions found in scriptwriting books. It was fascinating and I am now going to check all my characters against the five stable traits; Extroversion, Agreeableness, Neuroticism, Conscientiousness and Openness to Experience. She used lots of examples with characters, as well as how they apply to tropes. You score your character from 1-5 on each one. If you don’t score in the extremes for any then you have a boring character and need to rethink it. Also, characters that oppose each other in some of these will allow interesting interactions. I have pages more notes on this. Hope she is back next year!

‘Anatomy of the pilot episode of Cheers‘ with Paul Mayhew-Archer was a delight. He showed how the pilot got all the backstory sorted with just a few interactions and how to introduce a range of characters without confusing the watcher. Even the title sequence helped set the scene and reassure the watcher that it may be a pub but it is a safe, family place. Worth reading the script and watching the episode to see efficient writing in action.

After a long break I then sat in on his Vicar of Dibley ‘Script to Screen’ (the marriage episode). Lots of gossip about the characters and actors. How the interactions developed and changed from their original ideas. Again the title credits lead you from the motorway of normality to the village of the strange.

That was it for me. I had hoped to manage the full day but my body told me otherwise and I headed back to bed. 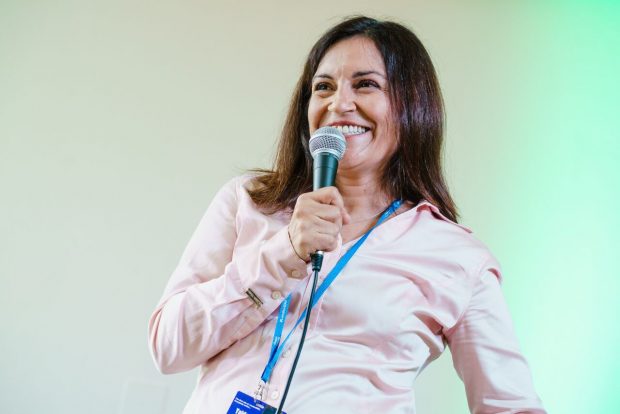 Started off with a brilliant ‘Script to Screen’ of Line of Duty with Jed Mercurio. If you haven’t caught this then consider your wrists slapped! It is on the edge of your seat writing at its best – I was actually screaming at the TV in the final episode of Series 3!

He discussed why he developed the series; how there had been a long spell of ‘good guy cop’ programmes since Between the Lines and he felt some balance was needed. This proved to be hard to sell and there was no initial support from the police, but gradually anonymous support came forward. The series is also jargon heavy but he wanted the police to talk as they would in a real situation. The characters in the series are wonderful. All have their flaws and you can find yourself wanting the bad guys to escape as much as the good – then feeling a bit guilty for doing so! Well, I do anyway.

Then I was off to another technical presentation: ‘Writing for Teens’ with Yalda Uhls. This was heavy on the psychology of tweens and teens; how they see the world and what they respond to. Their brains have a well-developed emotional area but a very undeveloped control area. To be real and relate to teens you need to grasp and compete with the social media that they use. Long form programming still works but transmedia needs to be considered with it. They are online a lot but it is still primarily to interact with friends – to network.

Sex and violence are also part of their lives – just like with adults – so should be there, but they want more than just that. What they say they want from a story is authenticity, inclusion/diversity, relatable heroes, the tech to feel real and of the moment, friends and intimacy. Teens are excited by risk and reward and respond best to positive stories. When asked what’s important to them fame is declining. Now the top two are achievement and kindness.

There were discussions on how the US sees Teens and Tweens (Gen Z=12-17) as a big market with lots of programming offered. However, in the UK there is a big gap between programming for children and those in their early twenties. There are some programmes offered but nowhere near the range of the US.

This session was recorded so get your ticket and you can watch the footage once it’s edited!

After that I staggered to the canteen for a much needed break. There are always other writers there chilling and ready to chat.

Later, I popped into the Virtual Reality (VR) suite. Well, I was dragged in by my daughter, but I was hardly objecting. This was a seated session of a 20min long-form narrative called CTRL by Breaking Fourth. It was beautiful to see and sad to watch. This was my first experience with VR and a gentle introduction. There was plenty of help with setting it up and the team were happy to chat about it. I was hooked.

I had hoped to stay for the Horror session and the British Screenwriters Awards but sadly I had to call it a day or I would be bedbound. For those that don’t know I have M.E. and need to pace myself carefully. The festival is very accessible though so don’t let your health issues hold you back! 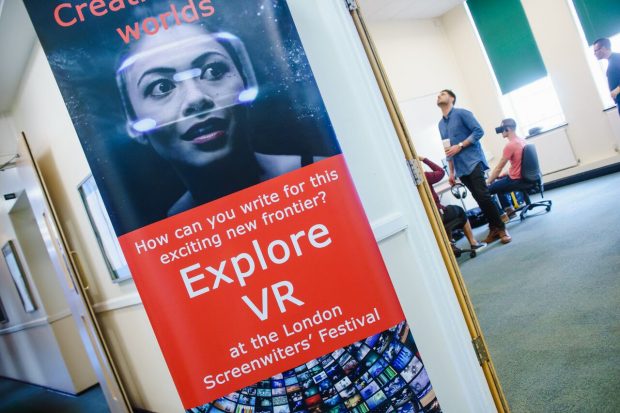 So Sunday arrived and I was feeling tired but I kept on going.

First session I attended was ‘Creating the Series Bible’ with Jeff Norton. I attended his session last year about creating your world, which again involved bibles but for personal use. I remember him saying think of it as the Wikipedia page a fan would write about your series. This time I dragged the youngest along because she had been struggling with the rules she needed to set for her SF novel.

This year the session was on writing a bible used for pitching to people. It is for selling, not writing. This could be a PowerPoint presentation or a document, but crucially it is short. You need to get the key points across in a few slides. The big tip was keep it visual. Include images of the type and look of a character, the tone of the piece, anything to help them visualise it. You don’t need to commission special artwork – googled images would do. You are giving the feel. I intend to get my head down and work on my bibles for a while!

He gave a list of the key pieces of info to include in bullet points. Again pages of notes. We then got a sneak peak of his next pitch. Sworn to secrecy. Saying nothing. It was good.

Next was ‘Subtext’ with David Pope. Not an easy thing to explain or teach but he did it wonderfully and kept it entertaining at the same time. His tips are to do the same conversation in your head with three different people you know. Note how the way you talk to them and pass on the information changes. Remember what the aim is in each scene. What does each character want? How are they being stopped? Remember to play with control between the characters. Who is in control at the start of the scene, who at the middle and who at the end?

Went to the Script Chat afterwards. This is where the discussion continues in a separate room. Most people drift off so you can end up with a more detailed discussion. Needed a break so went for another Virtual Reality session. This one was in the Marquee and so people could see you flinch and hear you scream!

In the middle of the marquee was a table. You sat on it and a pair of goggles – youngest says they were occulus rift ones – are put on your head. For those of us who are wheelchair bound or likely to topple sideways (me) they adapt the kit so you don’t need to get onto the table.

These sessions were shorter and you could choose from gentle to scary. “Bring it on,” I said and so had the horror experience. This was ABE VR written by Rob McLellan. It did make your skin crawl. I am told I flinched and squeaked but did not scream. Phew. Loved it.

As can happen at any event, sometimes presenters have to cancel or sessions be shuffled about. There are boards everywhere telling you of any changes and reminding you what sessions are on that day and where. So Lucy V Hay stepped up to fill the Mystery session with Writing Thrillers. Lucy has published a book on this – if you don’t have it, get it!

Well, the session was thrilling! Especially because I was sitting on the front row and had to keep on my toes – she knew I had read the book so pounced occasionally… Again lots of useful stuff. As I said, read the book. Youngest enjoyed Lucy’s swear-y style. The main point is that Thrillers and Horrors are not the same, usually. Jump scares = Horror. Rising tension = Thriller. Bet she corrects me on that one.

And that was it. 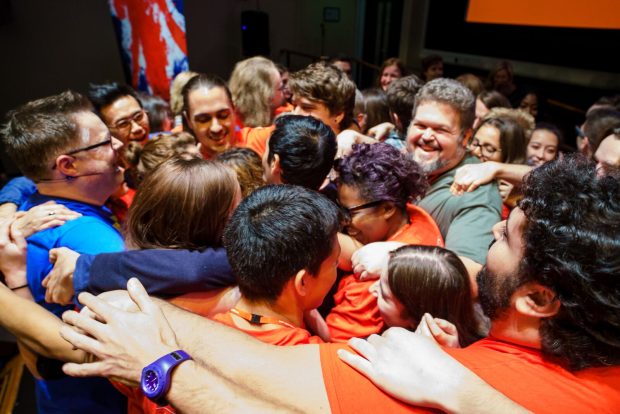 Chris Jones did the Festival Close to make sure we all went away hyped up to do brilliant work. It is tradition that the festival continues informally at The Globe, a pub round the corner. People exchange contacts with those they may have missed, swap stories about what they heard and what people did, get drunk or fed or both. This year I was too tired for that so Lilian Ryan, James Jay, Hannah and I had a civilised meal in a nice Italian restaurant round the corner.

It took me over a week to recover but it was so worth it! Don’t miss out on a wonderful gathering of kindred spirits that will also strengthen your writing.