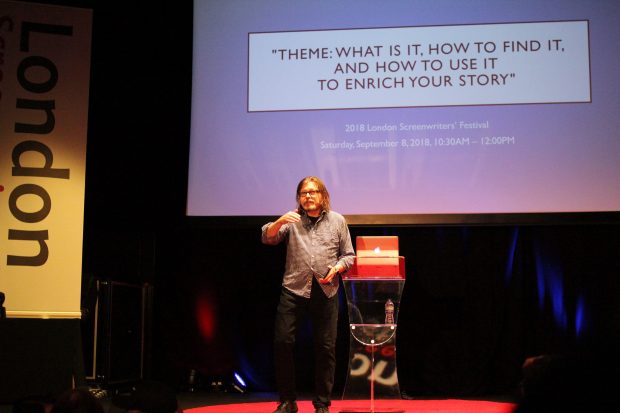 Nebulous, often misunderstood, everyone thinks it’s important and yet many describe it differently. Screenwriter, Producer and Educator Scott Myers joined us at the London Screenwriters Festival this year to help us delve into the mysteries of theme and how to use it to enrich our stories.

What Then Is Theme?

Some people think theme is a premise, some a quality that permeates every aspect of a story, Scott asks us to think about it in a different way, that if plot is what the story is about, think of theme as what the story means. The take of THEME = MEANING allows theme to touch every aspect of a story, becoming an almost spiritual narrative, the soul of the story. Stories can and perhaps should have multiple themes and sub-themes because well crafted story is of course, multi-layered. In that case of multiples the central theme or main theme becomes the unifying theme and can have both sub and adjunct themes.

How to Find Theme

In ‘The Shawshank Redemption’ if the central theme of the story is ‘get living or get busy dying’ then the sub themes of that film might be institutionalisation and hope, and the adjunct themes ones of violence and beauty. Theme can be expansion or it can become focus to allow us to better zero in on the central theme because every theme has an emotional connection to the characters. So to find the central theme, we would follow the protagonist, it will derive from their character.

In ‘As Good as it Gets’ the theme of how to make ourselves safe in our prisons is expressed by all three protagonists in different ways. Melvin is bigoted, Carol hides behind her son denying her feminine needs and Simon is bitter. As the three characters converge and go on a journey they confront their fears and become their better selves.

Theme can also be expressed as a talisman or motif. A physical object that takes on a symbolic meaning to a character is a picture theme that conveys a thousand words. Take for instance the red roses in ‘American Beauty’ or in ‘Cast Away’ the volleyball who becomes Wilson, a character of sorts in it’s (his?) own right, but also a visual theme of companionship.

Talismans have an almost magical degree of meaning, they are tangible, visible and immediate. The snow globe in ‘Citizen Cane’ is a talisman as is Harvey Dent’s coin in ‘The Dark Knight’ which has it’s own transformative journey mirroring Dent’s and becoming a symbol and even an instrument of life and death.

Motifs are more conceptual in nature; dialogue, music, visuals. In ‘Cassablanca’ the song ‘As Time Goes By’ is a motif theme. Visual motif can be as the field of wheat in ‘Gladiator’ something that repeats and adds more meaning in an instant than one could do with action or exposition. Even a gesture can be a motif.

Once theme runs through a story, it becomes the glue that binds it together, the emotional meaning of the story and the reason we have chosen to tell this story. The inclusion of theme helps our audience to feel the story’s resonance. Learning how to work with theme is therefore a vital skill to make our writing vibrant and rich. Something to practice with as we go about our writing.

I have sold my zombie comedy script 'Euston We Have a Problem!' to Hammer as a result of pitching at the festival."