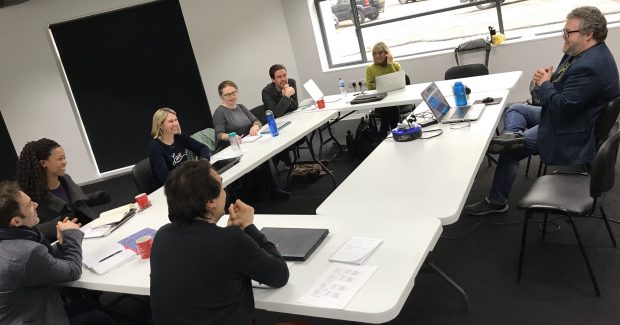 Through The Looking Glass: A Screenwriter Becomes Executive

One of our recent Talent Campus delegates flew over from LA to be a part of the whole adventure. A successful writer in her own right, she has more and more become involved in the production side of things. She wrote this post for us following a FB post…

The day after I came home from Talent Campus, I started a job as a Development Executive at a production company back home in Los Angeles. Prior to this, I’d always worked on the production side–helping physically make movies and TV shows for major studios. This was the first time I’d be working full time at the beginning of the process. I knew it was going to be a great learning experience, but WOW!! Not even a month in and I feel like I’ve gotten such an amazing education. In just a few weeks, I’ve already gained such great perspective on what it is to be a working writer.

I wanted to share some of my biggest takeaways here. Please let me know if it’s helpful/what’s most helpful/what else I can tell you. (Oh, and because I’m going to try and be specific as possible, I will also be anonymizing some details for all the understandable reasons 🙂

Who I Work For and What My Day Looks Like

To give some context, I’ll first describe my company and my day.

I work for a production company that is a division of a major motion picture studio. My unit develops live action kids and family shows. We currently do not act as our own studio, so we are primarily concerned with developing show ideas, attaching a showrunner, possibly attaching talent, and then selling that package to a studio and distributor.

My team is very small. There’s me, my supervisor, and our boss. Our boss also oversees another portion of the division and is more concerned with the business end than he is the creative (though he is very creative, too!). So it’s mainly just me and another woman dreaming up TV shows.

My day consists of a few things:

(I’m also still writing on my own projects, btw. Not giving that up!!)

Here what I’ve learned so far that has changed my view of my work as a writer:

Most of the scripts we get are…fine.

This is not to say that I’m about to start slacking off on my writing skills, but I came into this job prepared to read the most extraordinary scripts on earth. These are the scripts that GOT THROUGH, after all. They should all be Oscar-worthy, right??

We get scripts from writers at all levels of the industry, from seasoned showrunners down to absolute newbies who are are on their first script. And the quality of those scripts ranges from “yeah, that’s good” to “oh, yeah I can tell this person has been doing this a while.” Nothing yet has blown me away.

I’m not saying they’re not good–they are good. They’re well-crafted. They have a voice. But I haven’t read anything yet that feels out of reach for any of our skill sets.

Absolutely everything we’re reading comes from some version of a personal contact. We’re either talking to an agent, manager, or producer we know. We’re hearing from people we’ve worked with in the past. Or someone who knows someone on our team recommends someone they knew.

The “coldest” leads we follow are from the diversity showcases here. (White guys, don’t worry! I ~think~ that you could make a case for yourselves being diverse candidates to American diversity initiatives since you’re not Americans…but also, you already know me, so you have at least one in already!!)

I’ve definitely been inspired to re-ignite every single contact I’ve ever had and re-establish my own connections!! I’m an introvert by nature and I looooove my alone time. But I’ve challenged myself to book a breakfast, lunch, coffee, dinner, or phone call every day. I’ve got about the next month booked solid and while it is a bit intimidating, I also see how important it is to push ahead. And, every time I do meet with someone, I always find something fun about it.

First of all, the risk to us as executives is quite high. We’re primarily a WGA shop (not everything we do is under WGA, but most of it is) and that makes things quite pricey. For example, we have a show that we’re about to set up at a major distributor. They’ve given us a large order of episodes and just to get the first of those several scripts properly comissioned, it’s costing us about $100,000. The price drops a bit after that first script, but that’s a lot to get the project off the ground. If it all works out, that’s great, but if something goes wrong, the financial hit is just so big. All that to say that we feel a LOT better about shelling out that kind of cash if we have a relationship with the writers involved and we can be pretty sure they’re not going to screw us over.

We also need to be able to talk very specifically about those numbers with the agents and managers involved. And sometimes, in order to get our parent company to agree to a price, we need to get that price down, and it’s much easier to ask your friend who’s an agent to do you a solid than it is to ask an agent who’s a total stranger.

So yeah, we reach out to our friends a lot.

And when we meet new contacts, we spend a lot of time sussing out if we actually like and trust each other. That process can go on for months before we actually agree to even begin talking about projects we might do together.

I’m shocked at how many random things affect how we’re reading what we’re reading, so I have definitely learned that rejection is never personal. If I read a script that I’m not into, I don’t look up that writer or even bother remembering their name, I just stop reading and forget about it–I don’t have the time to do much else. So even if you turn in something terrible once, it’s likely that no one will even know it’s from you.

I’ll explain how our development process works and then I’ll list all the random things that can derail a project that have absolutely nothing to do with the writer.

How something gets into our development queue…in the most simple version possible:

Even if we really like something, there are about a billion things that can stall or derail a project:

I’ve been at work just over 2 weeks and I’ve already seen most of these things happen.

It’s also hard to get the production company (i.e., us) to tell you exactly why a project fell apart or stalled. We don’t want to put too much in writing because we want the flexibility to come back to a project should something change in our favour again. And we don’t want to say too much to agents on the phone because assistants listen in on those calls and we don’t want to say too much in front of them–a stranger who may or may not be in that position long term. So that’s another reason to work your networks. I, for example, have breakfast this week with a friend of mine who’s an agent (she’s representing some writers we’re working with) where I’ll definitely tell her something face to face that I won’t say on the phone.

In terms of what’s in our inbox re: pitch materials, there’s lots of things. There’s 1-pagers, 2-pagers, 10-pagers, decks, whole scripts, and everything in between.

As the person who has to read all this stuff, I would say that brevity is appreciated just because we have so much to get through. But ultimately, what’s most important is that it’s engaging.

As a writer, I definitely want to put in all the gorgeous, juicy details that I’ve come up with. But as someone reading a bunch of these, too many details can be confusing and can sometimes give the sense that the writer is already super set in their vision and isn’t keen on being flexible. Ideas change and fluctuate so much during conversations with the executive and then with the buyer. So for us, broad strokes and big ideas, character arcs, and relatable themes are really useful. But what exactly the character has for breakfast (unless it’s crazy germaine to the story) is less helpful.

Also, since we on the development side are trying to thread such a crazy specific needle based on the dozens of pieces of input we get everyday, I would say to spend enough time on these pitch docs to feel good about them. But not toooooo much time because we can tell pretty quickly if it’s the type of story that would even work for what we’re going for that day. Additionally, this is another great reason to work your networks because if you have that connection, you can just call and say “hey, I’ve got this idea about a dolphin who goes to university… is that something you think might work?” And then you can get a yes or no pretty quickly and potentially avoid having to write up a doc that’s not useful.

Another great reason to have a connection to someone on this side of the desk is that you then get the chance to talk about your ideas casually so that when you do submit your pitch materials, the person you’re submitting to already knows the gist of your story and possibly already knows what they love about it. This cuts down on the amount of time they have to spend coming to understand your project AND they can give you pointers on how to make your idea more sellable to their bosses.

Have Lots on Deck

I definitely remember feeling like execs are always looking for a reason to say no. There’s so much rejection out there. But being on the other side of the table, I can definitely say that we want nothing more than to fall in love with awesome ideas from awesome people. And we really enjoy hanging out and talking shop.

I do think it’s important to have those big passion projects that you put tons of time into, but I think it’s also helpful to have a bunch of ideas that are less developed that you can kick around when you have the chance to chat to people.

Thanks so much for this… This post has been annoymised at the authors request. If you want to apply for Talent Campus 7.0 you can do that HERE.