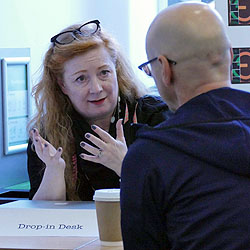 That’s what the team of professional Euroscript readers and editors offer to delegates who attends the London Screenwriters’ Festival. Slots are booked in advance (first come, first served) and the booking system opens 23rd July. You can read more about the Script Surgery HERE.

Script Editor Alizée has previously worked for the International Screenwriters Association and read for a number of international script competitions.

Credits include EastEnders, Holby City, Doctors, Taste of Life, House with Many Windows,

Anji Loman Field is a writer/producer working in TV, radio and film. She is currently writing a feature script for a UK client and has a slate of other projects at various stages of development.

As well as consulting for Euroscript, Anna is currently Script Editor on an Academy Nicholl Fellowship-winning screenplay in development with the BFI.

Deola Folarin is an award winning writer and director. She graduated from WSCAD film school with a BA (Hons) degree in Film & Video and the London College of Printing with an MA in Screenwriting.

Credits include Weekending, Doctors, The Attendant

Fenella Greenfield is a founder member of Euroscript and works as both script doctor and lecturer for the organisation. She also runs its annual Screen Story competition.

Kolton is an award winning filmmaker and novelist and is currently the Programme Leader for the BA Screenwriting (Hons) course at the Central Film School in London.

Laurence Gouldbourne has worked as a scriptwriter on TV sit-coms such as Desmond’s (C4) and Chef! (BBC1).

Nicola is a writer, producer, director and runs Rocket Room Productions.  As an actress she was a resident character in the series 'Home and Away'.

Theresa Boden is an accomplished freelance screenwriter & script editor and an Executive member and script consultant for Euroscript.

Has helped countless writers for over fifteen years.

Writer-director, Charles Harris has won international awards for his films for TV and cinema.

Ian has worked as a consultant for the UK Film Council, the First Film Foundation, the Script Factory and many other bodies and producers.

Paul has written for and directed the biggest names in comedy. He's also creative director of The London Comedy Writers' Festival

I’ve really learnt what I can do to move my career on from this point forward."

If you are serious about being a screenwriter, you have to attend the LSF."