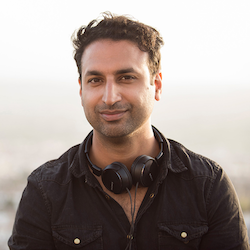 Abid Khan is an award winning writer & director with a unique voice and vast exposure to international productions. His debut feature film “Granada Nights” was released theatrical in the UK in May 2021 and was selected for “Breakthrough” by Film London Screenings. “Granada Nights” won numerous festival awards including Best Film at Barnes Film Festival 2020.

Abid is also featured in The Guardian in collaboration with Adobe UK as a breakthrough director for their Creative Change campaign. He also has 15 years experience in the Advertising industry working on global campaigns for clients such as Universal Pictures, Paramount, Sony Pictures, Time and Nike.