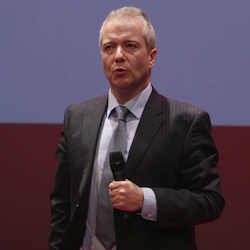 Alexis Kirke is a screenwriter and technologist who has been innovating in the field of film and Artificial Intelligence for the last decade. He has been regularly invited to consult on future of film by the media and has given multiple TED talks on technology and creativity. As well as writing screenplays by the traditional method, he’s been commissioned to create them using his Artificial Intelligence algorithms. Alexis has written for New Scientist and co-wrote/co-produced an award-winning documentary for BBC Radio. Appropriately enough, his screenwriting career was launched as a result of an algorithm: his first screenplay received a top 1% Bell Curve score on the highly influential Black List website – and was algorithmically propagated throughout Hollywood!

Alexis Kirke is appearing at the following sessions:

Judgement Day for your Screenplay with Alexis Kirke

In this session, Alexis explores the vital roles that algorithms play in the modern movie and TV industry, and how a screenwriter can use knowledge of these algorithms to their advantage.