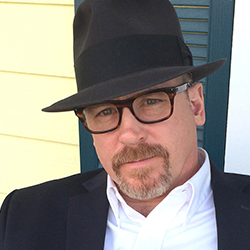 Ande Parks has worked as a comic book artist for nearly three decades, inking titles such as Daredevil, Ant-Man, Superman, Wonder Woman and Nightwing. He is best known for his long stint on Green Arrow, with frequent collaborator Phil Hester and writers Kevin Smith, Brad Meltzer and Judd Winick. Parks’ bold style has garnered him nominations in both the Harvey and Eagle awards.

Parks has authored the Green Hornet and Lone Ranger franchises for Dynamite, and has written Daredevil for Marvel Comics. He also adapted three Jonathan Kellerman novels to the graphic novel format for Random House. He is currently inking Black Hammer for Dark Horse, and developing new writing projects.

Parks developed Ciudad with the Russo brothers of AVENGERS INFINITY WAR and AVENGERS ENDGAME, and the resulting film, titled ‘Extraction’ and starring Chris Hemsworth, is on Netflix.

Ande Parks lives in Kansas. He is fond of hats, golf and bourbon.

Ande Parks is appearing at the following sessions:

As one might guess, the competition is fierce to write for Netflix, and rising to the top is a long shot. So how must it feel to create Netflix’s most successful film… EVER? Ande Parks, one of the geniuses behind EXTRACTION is here to tell us.