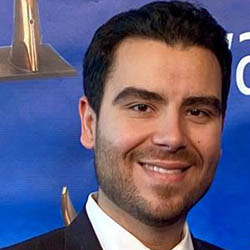 Andrew L. Schwartz is the Studio Liaison at Final Draft. He has previously worked in production management and as a Writers’ Assistant, Script Reader and Story Analyst for professional writers, studios and production companies. Andrew currently heads one of the longest standing Writers’ Workshops in Los Angeles that meets out of the Boston University – Los Angeles offices where he obtained his Bachelor’s Degree in Film & TV. He is also one of the original founders of the popular Instagram account, @sopranosgram and currently operates the popular Beatles meme page, @memethebeatles.

Andrew L. Schwartz is appearing at the following sessions:

Join Final Draft’s Studio Liaison Andrew Schwartz, as he demos the basics of the industry standard screenwriting software, then dive into how writers can use powerful new tools to brainstorm, visualise, collaborate, and customise the writing environment like never before.

As the world’s leading scriptwriting software, Final Draft formats scripts, but it can do so much more.  Andrew Schwartz returns to show you how to unlock the software’s powerful prewriting, visualising, character developing, and reporting tools.