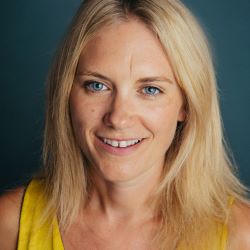 Anoushka grew up in the West Country. She studied BA Theatre Studies at Kingston University and undertook a Masters in Acting for Screen at Central School of Speech and Drama.

Following her studies, Anoushka acted on stage and screen and wrote and acted with a comedy sketch group.

For the last eight years, Anoushka has worked in PR at the Theatre Royal Haymarket and the Royal Court Theatre.

Anoushka had her first play, My Mum’s a Twat, staged at the Royal Court Jerwood Theatre Upstairs in January 2018. She was picked as one of 12 writers for the 2018 Channel 4 Screenwriting course. In August 2019, she performed and was an Associate Producer on a new version of My Mum’s a Twat, which had a sold-out run at the Edinburgh Festival Fringe.

Anoushka is currently an Associate Artist at The Bunker Theatre.

Anoushka Warden is appearing at the following sessions: