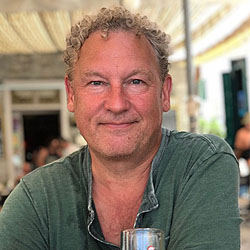 Ashley was educated at Queen Elizabeth’s Hospital School, Bristol, and the University Of Sussex, where he read English. He studied screenwriting at The National Film And Television School, where his graduation film Water’s Edge was nominated for a BAFTA. After cutting his teeth on Eastenders, Ashley created Where The Heart Is for ITV, a series that ran for over ten years. Other series that Ashley created and wrote during this time include Paradise Heights, Down To Earth, Life Support, Bonekickers and Anchor Me.

Ashley co-created Life on Mars and its sequel, Ashes To Ashes, winning two International Emmys and a BAFTA. There was a series about misbehaving angels for ITV – Eternal Law – and the long-running saga of a family trying to make a go of it on a South African game farm, Wild At Heart.

Wrote and produced The Living And The Dead, set in rural Somerset in 1894, about a man of science who starts to see ghosts. It starred Colin Morgan and Charlotte Spencer. His reimagining of Around The World In Eighty Days will be filmed in early 2020 and stars David Tennant.

In 2011 Ashley was made an Honorary Fellow of The National Film And Television School “in recognition of outstanding contribution to the British film and television industry”.

In a ceremony at Bath Abbey in 2016, Ashley was made a Doctor of Letters by Bath Spa University for his contribution to screenwriting and television production.

Ashley Pharoah is appearing at the following sessions:

Join him in Zoom for a conversation and questions that can bring your writing to the next incredible level.