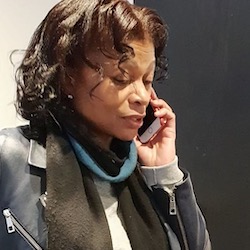 Carol Harding is currently producing Sara Collins’ The Confessions of Frannie Langton for Drama Republic/ITV and My Name Is Leon, an adaptation by Shola Amoo (The Last Tree) of Kit De Waal’s best selling book of the same title, directed by Lynette Linton for DRP/BBC.

Previous credits comprise flagship dramas: Look At Me for Greenacre/ITV, Agatha And The Curse Of Ishtar and Agatha And The Death of X for DSP/EndemolShine. 2020 Bafta nominated, Soon Gone: A Windrush Chronicle, eight short films for Douglas Road Productions in collaboration with the Young Vic for BBC 4 Arts, Casualty, WPC56, Doctors, Holby City and Molly an Afternoon Play for BBC1; Feeder for Film London and Metrosexuality, Fugee Girl and Heterosexuality for Film 4 Lab.

At the BBC, she was involved with the Disability, Safety and Portrayal Committees, Training Schemes for Programme Trainees and New Directors and Writers initiatives. Carol has also sat on the Boards of the Pact Independent Production Training Fund, Training Committee, Film Committee and Women in Film & TV. She is also a life member of BAFTA and a BAFTA Mentor, a Fellow of the Royal Society for the Encouragement of Arts, Manufactures and Commerce.

Carol is represented by Sue Rogers at Independent Talent.

Film and drama, adaptation or original scripts with character and narratives that I have an emotional connection with, and that also have broad appeal.