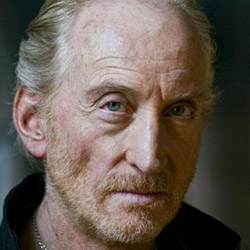 It’s nearly impossible to find an actor as influential as Charles Dance in the annals of British theater, television, and film. Dance overcame a stammer in adolescence to amass an enviable list of credits which includes Father Brown, The Jewel In The Crown, Edward the Seventh, The Phantom of the Opera and Bleak House.

His influence and fan base extends well beyond the British shores as well, having played roles in Top Gear, The Phantom of the Opera, Alien 3, the Last Action Hero, the James Bond franchise (For Your Eyes Only), and as Bond creator Ian Fleming himself (Aglia Television’s drama biography of the author).

Modern audiences will be most familiar with Dance’s work on worldwide sensation Game of Thrones, where he played Tywin Lannister who SPOILER and SPOILER and was responsible for the SPOILER SPOILER until he SPOILER.

In 2004, Dance made his debut as a writer and director with the international hit Ladies in Lavender, starring Judi Dench and Maggie Smith.

Dance lives in Kentish Town in London, but spends more than 75% of his time away from home working.