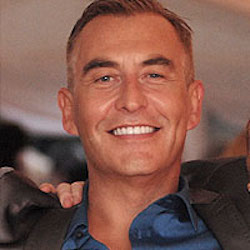 Starting in 1996, Damon’s first break was writing Birds of a Feather before becoming a core writer on the Coronation Street team.  To date he has written over 140 episodes, including the funeral of the legendary Blanche Hunt, the Wedding of Carla Connor to serial killer Tony Gordon, and the double episode tracking the immediate, heart-breaking aftermath of the 50th anniversary’s tram crash.

In 2011 he originated a series of online standalone shorts for Corrie, Gary’s Army Diaries, the first of their kind for the show, which were so successful, that Rochefort was asked to combine them to make an ITV 2 one-off of the same name. The same year, he wrote the book for the Coronation Street musical Street of Dreams starring Paul O Grady.

Damon is also Story Consultant for the BBC’s critically acclaimed Getting On with Jo Brand, Joanna Scanlan and Vicki Pepperdine, and has a number of projects of his own currently in development.

Damon also volunteers for the Kenyan charity S.A.F.E. (Sponsored Arts for Education) which promotes social health issues like HIV, female circumcision and heroin use through drama. Increasingly interested in pursuing this project led to Damon starring in and producing Corrie Goes To Kenya, a 2 part doc for ITV 1 which was broadcast in August 2012 to much acclaim.

In his previous career, Damon worked as a music journalist then went on to become a recording artist. His international No.1 smash ‘I Wanna Give You Devotion’ by Nomad and its follow-ups sold 3 million copies around the world, and he has also has produced and written for artists including Kim Wilde, LaToya Jackson, Dina Carroll, Kenny Thomas and Bad Boys Inc.

He also wrote and presented his own live chat show for BBC Wales, the BAFTA nominated Damon Rochefort Tonight.