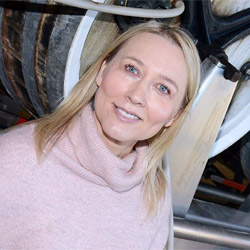 Following Deborah Haywood’s first short film Lady Margaret, she was selected for Screen International’s Stars of Tomorrow in 2007.  Since then she has made several award-winning short films that screened internationally, most notably, Sis (2010).

Pin Cushion, starring Lily Newmark and Joanna Scanlan, is Deborah’s debut feature. After opening Critic’s Week at Venice International Film Festival, 2017, it was nominated for three BIFA’S, longlisted for the Evening Standard Awards,  and has won prizes internationally.  It was released in July 2018 to four-star reviews across the board and was critic’s choice in The New York Times.

Deborah was also nominated as one of the 2018 top five breakout female filmmakers by Harper’s Bizarre.

Deborah is represented by Mark Casarotto, at Casarotto Ramsay Associates.

LSF makes you step out of your comfort zone and experience the fear that will make you free."