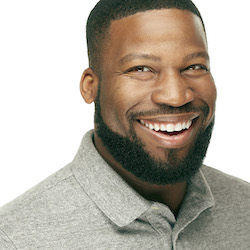 Dui Jarrod is a Day-time Emmy nominated & award-winning screenwriter, director, and playwright residing in Brooklyn, NY best known for BROOKLYN. BLUE. SKY. It is the first acquired web series for BET Networks after winning the Xfinity Best Web Series Award at the American Black Film Festival. His new series, “King Ester” has been nominated for 4 Day-time Emmy Awards. Jarrod’s work focuses on the power of human connection in the landscape of America.

Dui Jarrod is appearing at the following sessions:

Writing With Authenticity with Dui Jarrod

A great screenplay can only be grown from the authentic writer. Based on this philosophy, how do you access those inspirations that will make readers’ hearts soar?