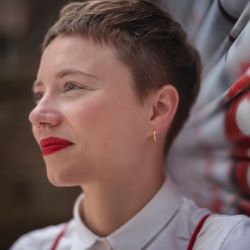 Francesca is an award-winning theatre producer with over ten years experience, having produced theatre at the Edinburgh Festival, in London, on tour in the UK and internationally. She is best known as the original producer of the multi-award winning and Olivier-nominated FLEABAG by Phoebe Waller-Bridge, which she has produced globally on behalf on DryWrite, most recently in London’s West-End.

Francesca now runs Francesca Moody Productions and since launching in 2018 the company has produced five world premieres. FMP’s production of BABY REINDEER by Richard Gadd was the Bush Theatre’s fastest selling show in history and has recently announced a West-End transfer to the Ambassadors Theatre in co-production with Sonia Friedman Productions.

Francesca has received eight Fringe First Awards and two Off West End Awards for her productions. She is a trustee of The Spring Arts and Heritage Centre and an Honorary Associate of the Royal Welsh College of Music and Drama.

Francesca Moody is appearing at the following sessions: