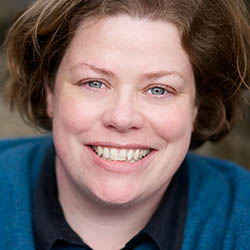 Gail Hackston is a writer/director based between London and Glasgow. In 2012, Gail produced the first crowdsourced feature film for Create50, 50 Kisses with the London Screenwriters Festival.

In 2013, she was selected for the EIFF Talent Lab and her feature screenplay The Green Door which won and placed in several screenplay competitions culminating with a professional staging in Chicago.

Gail’s first short film as writer/director Cancer Hair premiered at Cambridge Film Festival in Sept 2014, won ‘Best Fiction’ and ‘Best of Fest’ at the Isle of Man Film Festival, and IMDb New Filmmaker of the Year at Bath Film Festival.

Working primarily with female-centric comedy drama, Gail has a number of short film projects in development as well as two feature films, Project O with Roxy Holman of Jokers Pack and The Green Door with producer and fellow LSF alumni Zoe Guilford.

Having first been a delegate, then staff at LSF, Gail is delighted to be back as a moderator.