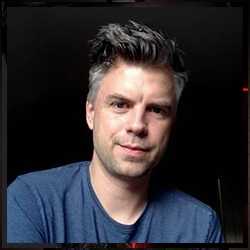 George Kay is currently executive producing Criminal, his series that he co-created for Netflix.

George wrote two episodes of Killing Eve for Sid Gentle and BBC America. He co-created, wrote and executive produced Stag for BBC 2 and was also writer and assistant producer on the final series of My Mad Fat Diary for Channel 4.

Formerly Head of Development at Twenty Twenty Television and Head of Factual at Blast! Films, George became a full-time writer in 2009 to concentrate on his first paid script commission, the feature Good Luck Anthony Belcher which went on to win the Brit List.

Since then, George has written episodes of some of the UK biggest TV dramas, including The Tunnel for Sky, and The Hour and Our Zoo for BBC. He also wrote and directed Double Lesson for Channel 4, a monologue performed by Phil Davis.

George Kay is appearing at the following sessions:

Following the international smash hit, Criminal, George Kay has another Netflix sensation on his hands with Lupin. What is the secret alchemy that keeps audiences returning to his shows and smashing that NEXT EPISODE button?