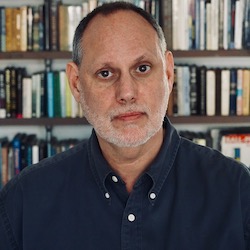 Glenn Gers has been a professional screen-and-television writer for 25 years.

His credits as a writer/director include LIKE.SHARE.FOLLOW, (a romantic thriller produced by Blumhouse & Divide/Conquer, starring Keiynan Lonsdale) and DISFIGURED (a micro-budget comedy/drama about an unexpected friendship between two women: one obese, the other anorexic.)

Awards for his work include an Emmy, a special award from the Women’s Film Critic’s Circle, nominations from the Writer’s Guild and PRISM Awards, multiple fifilm festival prizes and a Fellowship Grant in Screenwriting from the New York Foundation For The Arts.

As a teacher, Gers has lectured or mentored at The Austin Film Festival/Screenwriting Conference, Full Sail University, Cinestory, The David Lynch MFA Program, and the AFI Directing Workshop for Women. His essay, “Go Ask Rosenkrantz” is included in Write Now! Screenwriting, published by Tarcher/Penguin.

He teaches and coaches at his site, WRITINGFORSCREENS.COM and is offering free lessons and livestream coaching at the YouTube channel Writing For Screens.

Glenn Gers is appearing at the following sessions:

Six Questions Every Story Must Answer with Glenn Gers

With 25 years of TV (Cybill, Becker) and movie (Fracture, Disfigured, this year’s Zorro) writing experience backing him up, Glenn Gers has questions… Now your script needs to have the answers.

An outstanding and extremely well-run lab. My writing has benefited enormously from it. Can't thank you guys enough."