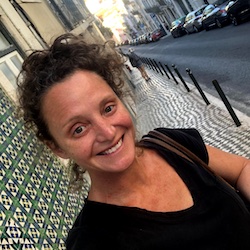 Grace Ledding is an independent producer and manager who began her career in entertainment ten years ago. She represents a wide variety of writers and directors for film and television, as well as best-selling authors, comic book creators, video game designers, and writers in animation.

She is Executive Producing an animated series for Netflix, HELLO NINJA!, that just launched Season 4, and a limited series she developed at 20th based on her client Robin Gerber’s biography of Ruth Handler, the woman who invented Barbie and started Mattel.

Grace represents a number of up-and-coming writing and directing clients including Zach Guerra (a protégé of Joe Carnahan whose film DEVIL’S DOSH will screen at BFI this Fall), award-winning commercial and music video director, Martin Roe, and a young writer from CSI, Jack Gutowitz, who is currently developing a pilot with Gina Matthews.

Before founding Agile, Grace was Vice President at Cerenzie-Peters Productions. Grace was responsible for all aspects of development, from identifying new material and setting up projects with studios, to helping raise development and production financing. She sold a remake of A BOYFRIEND FOR MY WIFE to Warner Brothers with Steve Carrell attached and a television series to Nickelodeon and Fremantle based on the novel, “My Life in Pink & Green.” In addition, Grace oversaw a diverse development slate including a Steve McQueen biopic written by Jesse Wigutow, a true-crime drama, BLACK MASS, written by Jim Sheridan and Nye Heron, an adaptation of THE FRIDAY NIGHT KNITTING CLUB with Universal Pictures and JRed Om, as well as a one-hour series for CBS Studios and CW Network, “The How-To Girl”, with producer Lynda Obst, based on her film, “How to Lose A Guy in 10 Days.”

Grace Ledding began her career as a trainee at the William Morris Agency, working as an assistant to prominent film and television agents including Steve Dontanville, Michelle Bohan, Alan Gasmer, and Aaron Kaplan.

She is an alumna of Barnard College in New York City.