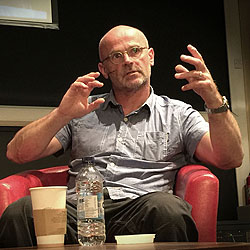 ‘LondonSWF offers a superb opportunity for writers of very different backgrounds and specialities to come together in a unique forum and exchange, and to learn and work together in honing their craft.’

Gub is an award-winning producer, formerly Head of Drama at Channel 4 and before that Controller of Drama at Granada. There he co-created Cracker and won an Emmy for Prime Suspect.

Highlights at Channel 4 include Young Person’s Guide To Becoming A Rockstar, Queer As Folk and the prestigious millennium show Longitude.

Gub produced all three seasons of the BBC’s critically acclaimed The Fall, and has most recently has set up Ringside Studios – a joint venture with Newan/TFI in France as a unique Anglo-French banner to produce international programmes through the UK.