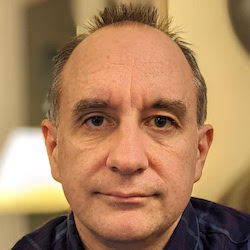 Guy Rowland is proof that it is possible to be an overnight success if you just hang in there for 30 years or so. He signed with Echo Lake Entertainment in 2021, having won the Grand Prize in the 2020 Finish Line screenwriting competition with the first episode of his limited series REVELATION. The Beverly Hills company are set to produce the series, and he is represented by their management division. Guy says even if the content is much the same, the front pages of his scripts now look much, much better with their address in the corner.

Guy’s first feature was SAM JACKSON’S SECRET VIDEO DIARY, which was nominated for the Raindance Award in 2005. As well as a screenwriter, he is a sound designer, composer and an enormous fan of Calvin and Hobbes.

Guy Rowland is appearing at the following sessions:

Mistakes Writers Make On Page One with Shannan E. Johnson

How do you get the reader turning those pages from the very start? What common pitfalls can you avoid? Script Consultant, and Founder/CEO of The Professional Pen is here to get your script off on the front foot.