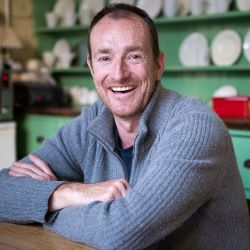 Henry Naylor is a multi-award-winning UK playwright who has been described by British critics as ‘one of our best new playwrights’ (Ann Treneman, The Times), ‘the Fringe’s unofficial star writer-in-residence’ (Mark Lawson, New Statesman), and ‘one of the most thought-provoking playwrights of our times’ (Ayesha Hazarika, The Spectator). Overseas, critics have compared his work favorably with Hemingway, Dickens and Athol Fugard.

In the past five years his plays have won or been nominated for 39 international awards, including one of France’s most prestigious awards for the arts, the Globes De Cristal and Norway’s ‘Oliviers’, the Heddaprisen. In 2016, he joined J.K. Rowling in having written one of the 10 Best Plays Of The Year by The Times. He is one of only a handful of writers to have won the Fringe First three times, and has won four of the top five Fringe awards at the Edinburgh Fringe, including the Carol Tambor Best of Edinburgh Award. The one he hasn’t won – the Amnesty International Freedom of Expression Award – he’s been nominated for three times.

Three of his plays have had month long runs off-Broadway, and in 2017 alone there were over 300 public performances of his work, over five continents. His work has been translated into ten languages, and four of his plays have been published by Nick Hern Books. At the time of writing, there are productions of his work playing in Belgium, USA, Greece and the UK.

Before becoming a playwright, Naylor had a long career as both a performer and writer for TV and radio. He wrote for top British comedy shows Smith & Jones, Lenny Henry, Alistair MacGowan, Headcases and Dead Ringers – and was even a lead writer for legendary satirical puppet show Spitting Image. As a performer, he shared a successful double-act with Andy Parsons; together the duo hosted nine series of their own show Parsons & Naylor’s Pull-Out Sections on Europe’s largest radio station, BBC Radio 2, garnering some of the highest ratings for a radio comedy in the Noughties.

Henry Naylor is appearing at the following sessions: