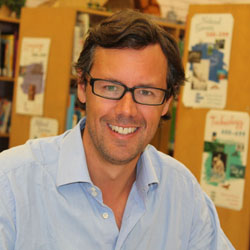 Jeff Norton is an author, writer-producer, and founder of Awesome, a creative content company.

He is the author of the award-winning thriller series MetaWars (Hachette), the laugh-out-loud books Memoirs of a Neurotic Zombie (Faber), the sci-fi comedy-adventure Alienated: Grounded At Groom Lake (RandomHouse), and the adventure series Dino Knights, which is currently in development for television with The Jim Henson Company / OmniFilm Entertainment. He’s also the creator and co-writer of the best-selling Princess Ponies series (Bloomsbury).

Jeff packaged and executive produced Susan Hill’s Ghost Story (The Small Hand) for Channel 5. Jeff was Executive Producer on the pre-school show Trucktown (Nelvana) based on the NYT best-selling books by Jon Scieszka.  And as a television writer, he has drama projects in funded development with broadcasters on both sides of the Atlantic.

Previously, Jeff ran the Enid Blyton literary estate and before moving to the UK, he worked in creative development in Hollywood and produced the award-winning Choose Your Own Adventure interactive movie featuring William H. Macy and Frankie Muniz.  Originally from Canada, Jeff now lives in the UK. Jeff is on the web at www.jeffnorton.com and tweets as @thejeffnorton.

Jeff Norton is appearing at the following sessions:

I’ve really learnt what I can do to move my career on from this point forward."