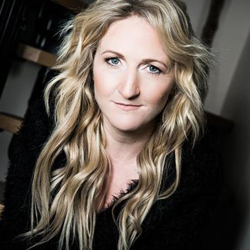 An award-winning director, noted for her ability to cast, create drama, evoke emotion and pace a script to screen. Selected to shadow Jon East on KILLING EVE (BBC America). A rare opportunity that has allowed her to develop her own unique style for TV and film directing. Jo has since been invited to shadow direct Jennie Darnell on Trigger Point (Jed Mercurio / World Productions) later this year. Jo runs her own company, Aston Productions.

As a natural collaborator, Aston Productions have an interesting slate of co-productions that support Jo’s passion for human led, emotionally driven stories including animation, TV and features.

For TV, Jo will direct “The Sleeper” – an 8 part TV series with StoryFirst, Producer Dominc Barlow (Discovery of Witches.) Also attached to direct a new 12 part YA TV Series for Troy TV.

A full voting member of BAFTA and Directors UK.

We were absolutely thrilled about the positive response and engagement from the delegates, not to mention the support from the festival itself!"