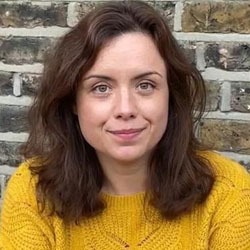 Joanna Tilley is a tried and tested woman who has been learning the craft of comedy writing and performing over the last decade, alongside working as a journalist.

She has written for the BBC, the Evening Standard, Al Jazeera English, Sky Sports News, The Big Issue and TNT travel magazines. She recently worked as a reporter for TV trade publication Broadcast where she expanded her contacts with producers and commissioners, and found out what they are looking for in their scripts and projects.

​Alongside her journalism work, Joanna has written comedy for BBC Radio Scotland and UK Greeting Card companies. She is part of a sketch group that has performed at four Camden Fringe festivals and regularly contributes sketches to The Release The Clowns podcast.

In 2018, she wrote, produced and directed a pilot episode of her sitcom Old. She is also a consultant for the largest community of independent comedy creators, The Comedy Crowd.

​In 2020, she made longlists for BBC and Short Com writing competitions.

​Joanna understands the long and often lonely development process that writers have to go through. Attending writing groups, she has also noticed that some male writers seem to lack confidence when it comes to how to approach their female protagonists and female subsidiary characters.

This is why she would like to work with writers to help them create authentic, powerful and well-rounded female characters. If male writers are falling into any tired, worn cliches, she will not be afraid to call you out! (so bring a tin hat)

Joanna Tilley is appearing at the following sessions: